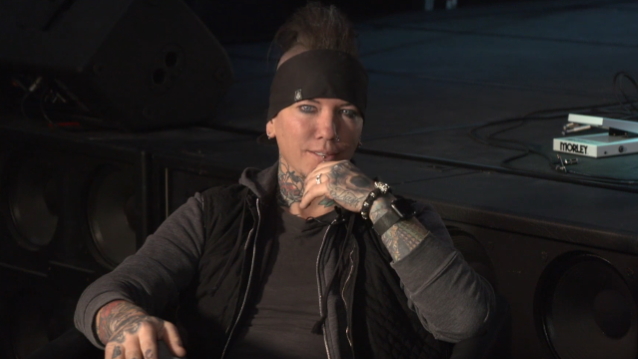 DJ ASHBA On His Exit From GUNS N' ROSES: 'That Was A Chapter In My Life, And I'm Starting A New Chapter'

DJ Ashba spoke to Richard Allan, host of "Action Figures" on Amazon Prime, about his exit from GUNS N' ROSES in 2015 after a six-year stint with the legendary rock group.

The guitarist, who joined GUNS N' ROSES in March 2009 following the departure of Robin Finck, issued a statement in July 2015 saying that he was leaving GUNS N' ROSES "to dedicate myself to my band SIXX:A.M., my adoring wife and family, and to the many new adventures that the future holds for me." He later claimed that he was approached about being part of GN'R's "Not In This Lifetime" tour, but that he declined, citing his desire to pursue SIXX:A.M. full time.

Asked if all the people close to him were telling him he was "crazy" for leaving GUNS N' ROSES just before the launch of the band's reunion tour, Ashba said (see video below): "My thing is, it was realy cool to get that call [about staying with GUNS for the 'Not In This Lifetime' tour], but on the other hand, I knew in my heart where I wanna go.

"I've never fooled myself," he continued. "When I was in GUNS, people would be, like, 'Oh, you're in GUNS N' ROSES.' I've never been that guy that's 'formerly of' and try to cling on to an old band name that, really, I shouldn't be taking credit for — I've never been like that. If you go to any of my socials, you don't even see 'guitarist of SIXX:A.M.', because I never wanna live in the past. I'm so focused on where I'm going. There's a lot of people that do that, and there's nothing wrong with it — it's a legit credit I'll die with, but at the same time, I don't wanna live off of it. I wanna keep building. And I'm just getting started.

"That was a chapter in my life, and I'm starting a new chapter," DJ added. "So, to me, it's one of those things where I just wanna focus on where I'm going, and that makes me excited."

Ashba previously discussed his departure from GUNS N' ROSES in a November 2016 interview with SiriusXM's "Trunk Nation With Eddie Trunk". He stated at the time: "Well, there [were] multiple reasons [why I left GN'R] — a couple that I won't go into — but the biggest reason was I needed to get back to my roots, back to what I really truly believed in, and that was playing songs I helped write with [SIXX:A.M. bandmates] James [Michael] and Nikki [Sixx]. We [SIXX:A.M.] have five albums out [and] we have a ten-year career together. So we did a tour, 'Modern Vintage' tour, where it was, like, nineteen shows, and that tour really changed my life and put my career back into perspective — you know, being out on the stage and connecting with the fanbase."

Ashba also once again claimed that he was asked to stay in GN'R for the "Not In This Lifetime" tour, but that he decided against it, preferring instead to pursue his own career path.

Four years ago, former GUNS N' ROSES bassist Tommy Stinson said that he found it "funny" that Ashba "made such a big deal about" quitting the band at a time when "there wasn't really anything going on" with the group. Stinson, who was in GUNS N' ROSES from 1998 until 2014, told HardrockHaven.net: "[DJ] called me up on the phone and told me that he was gonna quit, you know, and this that and the other thing… [It] seemed like it was kind of inevitable that there was going to be a reunion happening, so I think he… I don't know if he [laughs] tried to get in front of the curve to, you know, drum up some extra fucking press for himself. I don't really know what the deal was, but I thought it odd. I thought it an odd time to make a big stink about quitting, you know?"