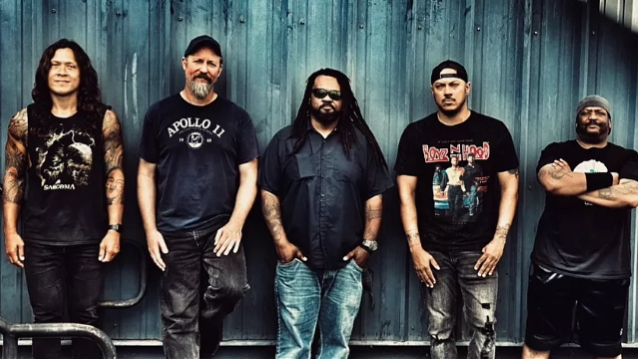 Speaking to the "Everblack" podcast about GOD FORBID's return to the stage, Coyle said (as transcribed by BLABBERMOUTH.NET): "[It was] a lot of fun. [It was] very challenging. That material is really taxing, especially when you've stepped away [from it for a while]. I've always stayed pretty up with it as far as playing it consistently, but it was a thing where once we kind of all got into a room, it was pretty much all there in terms of the chemistry and the sound and the power of the songs. It's cool, because you don't know how it's gonna be. You take a long time away from something, and you don't know how well it's gonna age or [if] you [are] gonna feel like you're putting on an old pair of shoes that doesn't exactly fit. But it was great, man — it was just great being around everybody.'

He continued: "It was a stressful situation because it was a festival kind of in the middle of nowhere, and the logistical parts of that was a lot to deal with. But we figured it out. We had a lot of things go wrong, but everything ended up working out pretty well. I thought the show was great; it was a lot of fun. And now we have some new opportunities coming up for next year. We're not gonna do a ton of stuff. Some of the guys have got kids and jobs and stuff, so I don't think there's an opportunity for the band to be a full-time thing or [to do] a full tour. It'd be hard to imagine how that would work, logistically. But it's cool that the band still seems to have a place in the hearts of a lot of people. And so we're gonna try and honor that as much as possible. I don't have kids yet — I do music as my career — so for me it's not a big deal; I can play it whenever; I can go on tour with GOD FORBID whenever. But I can't make that promise for everyone else. And it's a collective affair."

This past May, Doc told the "Drinks With Johnny" podcast that he didn't rule out putting out new music with GOD FORBID.

"I was kind of the main kind of riff writer [and] songwriter for the band for a good portion of those last few records," he explained. "So me as a writer, there's always stuff [I'm working on that] I'm, like, 'That sounds like a GOD FORBID thing.' So there's always stuff that I'll just kind of put to the side or kind of [have] in the back of my [head] that theoretically could be that. So there's definitely some material that definitely could exist, but I am very much taking it one step at a time.

"I have a tendency to have a lot of big ideas and go [down] a lot of rabbit holes [in] my head, but unfortunately — not even unfortunately — you want to make sure everyone's a part of that, not just it's my little kind of… Sometimes I get all hyped up in my head, but it's. like, it takes a village, and everyone has to be on board," he continued. "It's important to make sure everyone is excited about anything you're doing; that's just very, very important to me.

"I really enjoy the band dynamic and having everyone be involved and be excited about stuff because I really believe in the synergy of that. I think GOD FORBID was one of those bands where the sum was better than the parts, that everyone together made something that outpaced our actual talent and ability, you know, because of the chemistry."

As previously reported, GOD FORBID will take part in LAMB OF GOD and Sixthman's first-ever Headbangers Boat, sailing October 31 - November 4, 2023, from Miami, Florida to Nassau, Bahamas aboard the Norwegian Pearl.

GOD FORBID's latest album, "Equilibrium", was released in March 2012 via Victory Records. The bulk of the CD was recorded by Mark Lewis (THE BLACK DAHLIA MURDER, WHITECHAPEL, DEVILDRIVER, TRIVIUM),with Jason Suecof (TRIVIUM, ALL THAT REMAINS, THE BLACK DAHLIA MURDER, CHIMAIRA, DEVILDRIVER) stepping in during the the vocal-tracking stage. The effort was mixed by acclaimed Swedish producer Jens Bogren, who previously worked with such acts as KATATONIA, OPETH, PARADISE LOST and AMON AMARTH.