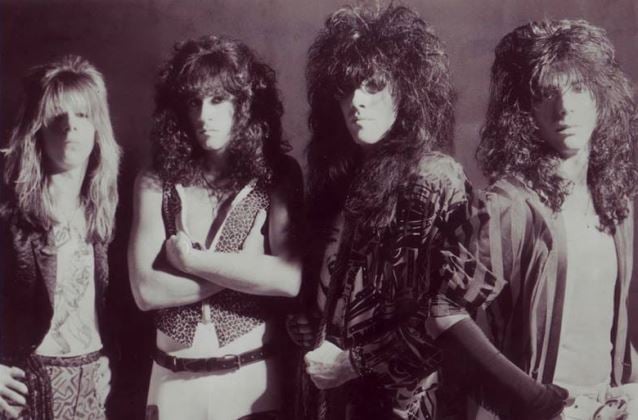 For every rock and roll band striving to grab that ever elusive brass ring and "make it" in the music business, there are a million others equally talented, equally inspired, equally hard-working that unfortunately never get their shot for a confluence of reasons... timing, fate and just plain dumb luck. Some bands were meant to succeed and others, despite their efforts, are destined to crash and burn, their golden dreams of musical stardom abruptly torpedoed and vanquished.

In an alternate universe, TUFF LUCK should have graced the cover of Rolling Stone magazine and instead has withered in total obscurity. That is until now...

TUFF LUCK is headed up by Andrew Klein, the younger brother of TUFF LUCK drummer, the late Todd Kelly. As for the story arc, Klein explains, "The film will focus on TUFF LUCK's formation, rise, and eventual demise while also drawing attention to a once thriving and vital music scene in Florida, which spawned such acts as MARILYN MANSON, MATCHBOX TWENTY, and SAIGON KICK."

Based in South Florida, the aptly named TUFF LUCK became the hottest attraction on the local music scene by 1986, routinely drawing hundreds of fans to their gigs. They released one album on Ann Boleyn's underground label, New Renaissance Records. The self-entitled debut included fan favorites such as "Sleaze If You Please", "Tonight Tonight", and "Take It Or Leave It". TUFF LUCK was on the precipice of landing a huge record deal with Atlantic Records when they seemingly had everything going for them.

Over the course of its ten-year career, the gifted hard rock outfit was an odds-on favorite in the "next big thing" rock and roll sweepstakes and had expanded their profile, opening shows for hair metal giants DOKKEN and STRYPER, among others.

What made TUFF LUCK stand out from the countless other metal bands populating the region was their uncanny level of musicianship, skill and consummate showmanship. Virtuoso guitarist Dave Scott and bassist James Marino were championed as future stars on the rise in Mike Varney's high-profile monthly column in Guitar Player magazine. Meanwhile, drummer Todd Kelly was voted Florida's "Best Drummer" on multiple occasions, attracting attention from endorsement suitors such as Paiste. Rounding out the metal quartet was vocalist Kenny Monroe, with his commanding stage presence and smoky charisma, he was the ultimate front man. All the ingredients were in place for a national breakthrough, all except the elusive major record deal.

Had the fickle hand of fate anointed them the career break they deserved, their story would have been an altogether different one. TUFF LUCK would have been recognized as one of the leaders of the '80s hard rock scene. Under the aegis of Klein and Margolis, the saga of the band doesn't end there. The new documentary chronicles TUFF LUCK's uphill quest for world domination, emboldened by a refreshing "warts-and-all" slant. It's a story of survival, a story of stubborn dedication, a story of fierce commitment and unwavering ambition. A story of four close friends who shared big dreams. Quite simply, it's a tribute to the enduring spirit and magic of rock and roll music and a story that we, the fortunate and the beleaguered, can all relate.

Slated for release in July 2014, this "must-see" documentary will appropriately receive a world-premiere screening in the band's old stomping ground of South Florida.