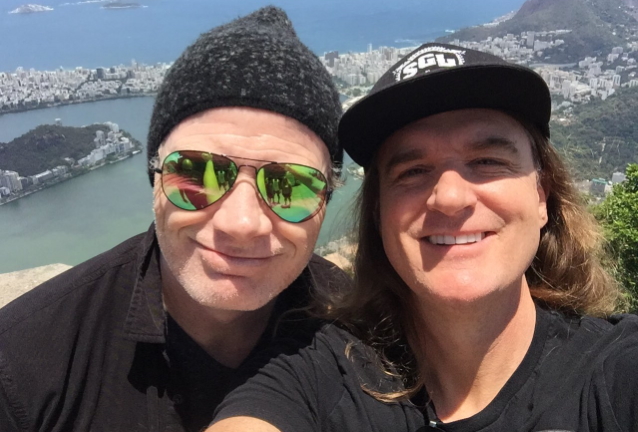 Does DAVID ELLEFSON Still Have A Friendship With DAVE MUSTAINE? The Bassist Responds

In a new interview with "The Cassius Morris Show", David Ellefson once again opened up about his dismissal from MEGADETH six months ago, just days after sexually tinged messages and explicit video footage involving the bassist were posted on Twitter. At the time, Ellefson released a statement on Instagram denying all social media chatter that he "groomed" an underage fan. He also filed a report with the police department in Scottsdale, Arizona alleging unlawful distribution of sexually explicit images of him by unknown offenders. In the report, Ellefson admitted that he had been exchanging sexual text messages with a Dutch teenager, who captured a video of several of their virtual "masturbating encounters" without his consent and shared them with friends. (According to Ellefson, the woman was 19 at the time of their first virtual sexual encounter.) Ellefson, who lives in Scottsdale, first became aware of the video on May 9, when the claim "David Ellefson of MEGADETH is a pedophile" appeared on Instagram. Ellefson told police he was notified on May 14 by MEGADETH that the band would be parting ways with him. Three days later, he was fired.

Asked if his split with MEGADETH affects only his professional relationship with the band or if it also means the end of his friendship with MEGADETH leader Dave Mustaine, Ellefson told "The Cassius Morris Show" (as transcribed by BLABBERMOUTH.NET): "My view on that is, look, relationships are never really fully done — especially one where you've had sort of a brotherhood and a professional [relationship] and friendship and all these other things. If you're in a band, it's not like, 'Dude, it's just business.' You're creative, you're friendly, there's business — all those things are intertwined; it's all part of that. So, if we're not hanging right now…

"I don't wish anybody any ill will; I wish everybody the best," he continued. "I think that's one of the ways to sort of bless it — you give it your best and you give it your best energy and not harbor grudges on anything. Instead of being sad that it's over, be glad that it ever even happened. We got to live a dream. We got to do something most people will never get to do, and we got to do it. So, if this is the sort of exit from that, or a timeout from it, whatever it is, let it be what it is.

"It's easy to micromanage stuff in the rearview mirror, but that's all meant to be behind you," he added. "The good news is, look, our songs still get played everywhere. They get played on the radio. I hear 'em around. I see people wearing our t-shirts. And it's kind of, like, cool. That's awesome. I'm proud to have been a part of all that."

Last month, Ellefson spoke to SiriusXM's "Trunk Nation With Eddie Trunk" about the statement Mustaine — who formed MEGADETH with Ellefson in 1983 — released on May 24 announced the bassist's departure from the band. In the statement, Dave said: "We do not take this decision lightly. While we do not know every detail of what occurred, with an already strained relationship, what has already been revealed now is enough to make working together impossible moving forward." Asked if he was aware of any tension between him and Mustaine and whether he "felt like the ice was getting ready to break again," Ellefson told "Trunk Nation": "I did not. I think one of the things — and this probably started 20 years ago, when MEGADETH was disbanded in 2002 and then put back together in 2004, it was very clear in 2004 that it was gonna be reframed around Dave unilaterally, one hundred percent being the boss and running the show. Gone were the days of the partnership, the '90s, where it was me, Nick [Menza], Marty [Friedman], Dave — kind of 'the four horsemen ride again' kind of mentality… That day was done; it was not gonna be that anymore. And that's where we fell apart in 2004 and I wasn't with the group through those years. Coming back to it in 2010, now we're a few years older, [with] a little more maturity in the situation, realizing that we're better together, that even though it's not, on paper, a partnership, there's a kind of visual partnership — the optics of it are kind of, like, 'Yeah, this looks better as MEGADETH with me and Dave together. We're one of those bands that, although Dave is the quarterback and the quarterback still plays, the overall feeling and likability and I think everything about it just feels better when it's Dave and Dave together, because we've been together from the beginning for so many years. And I think that worked really well for the last decade. At the same time, Dave and I are grown men, and we have opinions. It's not the thing where it's just Dave and three side guys when it's me and the band. And apparently, they didn't want that anymore — they wanted it to not be that. And I can't speak for them, 'cause I don't know. I'm not trying to put words in anybody's mouth about that. But it just seemed like 'there's just too much history here, and let's just part ways now and let MEGADETH move forward on a new day with kind of a new marching order.' So rather than fight it, which is what happened 20 years ago, 'cause we were dissolving a partnership at that point, we're not dissolving a partnership [this time]. It's, like, 'Hey, we don't want you here. There's the door. Don't come to work on Monday.' So, it's, like, 'Okay. Fine.' And that's just how I viewed it, and that's how I view it today. I don't have any sour grapes over it, and I'm not bitter about it."

We will always be best friends.@ellefsondavid@Megadethpic.twitter.com/kzs89sA8Vy