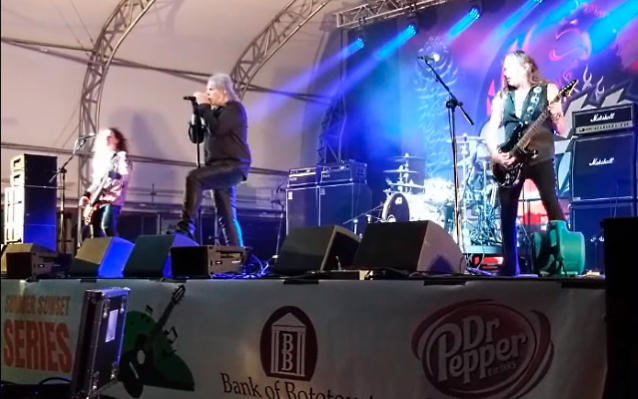 DOKKEN played a "socially distanced" concert last night (Friday, July 17) at Dr. Pepper Park in Roanoke, Virginia that featured special guest guitarist Reb Beach (WINGER, WHITESNAKE). He was filling in for DOKKEN's longtime guitarist Jon Levin, who had opted to sit out the show due to the coronavirus pandemic which is sweeping the globe.

Fan-filmed video footage of last night's show can be seen below.

DOKKEN frontman Don Dokken explained the guitarist switch in an interview with Greg Prato of Songfacts. He said: "Reb is coming to fill in because Jon can't go on the road right now — he doesn't feel comfortable with the COVID because his father is 90 years old and he's the primary caregiver. He said, 'Man, if I get COVID and give it to my dad, he'll die.' And I said, 'I get it, Jon. I respect you and your father.' So, I got Reb coming in to fill in for these two shows, and I just told Jon, 'Let's hope for the best. Let's hope the COVID thing gets better and they come out with a vaccine. Until then, if you don't feel comfortable getting on a plane, then don't.'"

He continued: "I'm taking a risk doing these shows [in July]. I know that. But what are you going to do? My girlfriend makes me put the gloves on, the mask on, the spray — we constantly spray our hands. I try not to wipe my mouth. I'll go to Home Depot and buy supplies for the house, but mostly I'm just staying home. So, she's not happy about me going on a plane. I have five or six plane flights in two days, so that's pretty high chances.

"My son is a pilot, and I talked to him — he flies for JetBlue. My son flies an A300. He's young to be a captain — he's only 33. I said, 'What's going on with the flying?' And he said, 'They're just going to try and space people out.' But it's kind of a joke, because he told me all the air in an airplane is just recirculated. They just send it to the scrubbers — to the engine filters –— and they send it right back to the cockpit. So, all this '20 feet away, 10 feet away,' it's all kind of bullshit.