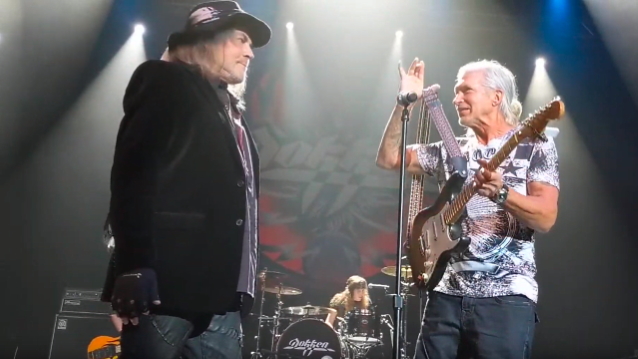 George Lynch rejoined DOKKEN on stage last night (Friday, March 6) at the Hard Rock Live in Biloxi, Mississippi to perform three of the band's classic songs: "Kiss Of Death", "When Heaven Comes Down" and "Tooth And Nail". The reunion was the first of several DOKKEN live appearances this year which include what is being billed as a "special encore performance" featuring Lynch and Don Dokken.

Fan-filmed video footage of the Biloxi concert can be seen below.

Longtime DOKKEN guitarist Jon Levin introduced Lynch by stating: "It's such an honor to play for everybody here. For all of you, you know I never speak — I probably have never spoken once at a DOKKEN show — but it's a special honor for me to be able to do this tonight, because one of my all-time favorite effin' guitar players is here tonight. And it's such a privilege for me to be able to play and introduce him. So please give it up for George Lynch. You know who he is. Let's fucking hear it."

Dokken then addressed his recent medical issues, telling the crowd: "I'm sure you all know from the Internet that I had a bit of a problem; I had surgery. I woke up and I fucking couldn't walk; I was paralyzed. And that's the way it fucking goes. And the doctor said, 'Well, you might be able to go on a walk.' And I said, 'You know what? Fuck you. I'm gonna go back on tour. I'm gonna fucking sing. Fuck you, doctors. We're going on tour and we're gonna kick some motherfuckin' ass. And George called me and he said, 'Are you all right?' 'Mmm, I'm hangin’ in there.’ So, here we are."

Following the release of DOKKEN's latest album, 2012's "Broken Bones", Don was ruthlessly criticized by fans after radiation treatments from a bout with stomach cancer and eventual vocal-cord surgery hurt his performances.

Since completing the Japanese reunion dates, DOKKEN has continued to perform with the group's current lineup — including bassist Chris McCarvill and Levin.

DOKKEN is currently working on material on a new studio album, tentatively due later in the year via Silver Lining Music, the label owned by Thomas Jensen, one of the founders of Germany's Wacken Open Air festival. It will mark the group's first disc since 2012's "Broken Bones".

Over the past three years, Lynch — one-fourth of the classic DOKKEN lineup — has appeared on recordings by THE END MACHINE, KXM, ULTRAPHONIX and SWEET & LYNCH.

Come rock out to Dokken/Lynch Reunion Tour TONIGHT at Hard Rock Live!! Show starts at 8PM. Doors to this show open at 5:30 PM. Enhanced security measures have been implemented for this show, please arrive early. We look forward to rocking out with you! #hrhbiloxi