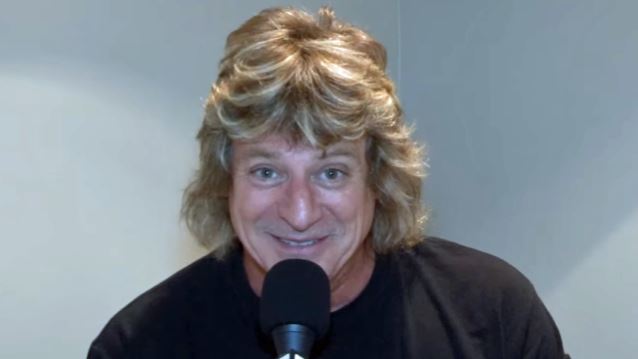 DOKKEN drummer Mick Brown was interviewed by rock journalist Mitch Lafon for a recent edition of the "One On One With Mitch Lafon" podcast (Facebook page). You can now listen to the chat using the Spreaker widget below.

Speaking about the long-rumored reunion of DOKKEN's classic lineup, featuring Brown, bassist Jeff Pilson, vocalist Don Dokken and guitarist George Lynch, Mick said: "There's talk of us doing something in Japan at the end of this year. And if that happens, and we make it through that, then, yeah, maybe there could be some talk of some [more gigs], but I'm, like, 'One step at a time, guys.' I know how we are. Let's just get through that — six shows. And if we can do that, well, then, yeah, maybe we can move ahead. But I don't know. It's just up in the air. We'll just see how it goes."

Asked why he thinks the members of DOKKEN's classic lineup have had such a problem getting along over the years, Mick said: "Listen, some people don't change. It was something that was there from Day One. I mean, it's never gonna go away; it never has gone away. And that's what's making me feel a little bit hesitant about getting together again. I'm, like, I already lived this for so many years. Jeff and I were, like, 'Oh, God. We have to go through this with these guys.' I'm just thinking, I haven't seen a change in either one of them [Don or George], really, so I don't know what to expect, but, hey, I'm willing to find out. In spite of ourselves, we always seem to do well. That's what our manager used to tell us. He goes, 'In spite of yourselves, you guys are really making me mad, 'cause you're getting real famous and you shouldn't be, 'cause you're just a horrible bunch of guys together.' [Laughs]"

According to Mick, he and Jeff have made countless attempts to get Don and George on the same page, without much success. "There comes a point where you go, 'This is just not gonna change.' And it starts to eat us up alive," he said. "You have to decide: well, I'm in or I'm out. And just let it go and play ball with it. Somehow it seems to be work out, but it's never very easy, and I'm sure it's not gonna be this time either."

Brown went on to admit that DOKKEN's proposed reunion is not motivated by creative inspiration. He said: "Listen, if I had to be real honest with you, it's the money we're doing it for, and I think that's the wrong reason. I think the reason should be we want to play together, and I don't think anybody wants to play together, but the money we're being offered to do it, you can't say no. And, to me, that's the wrong reason. But there it is."

He continued: "I'd rather [be] excited about playing with the four guys again — like, 'Oh, man. It's gonna be great. What can we can we do?' — but I don't feel that way. I just feel like, 'Wow, we're just gonna go do these…' I'm already happy playing with the DOKKEN I'm in now, with Jon Levin and Chris McCarvil and Don.

"At one point, Don and I owned the band, and I had to sell my portion back to him, because I realized I'm dealing with a guy who doesn't play ball with someone else anyway, so I'm a fool to hold on to it. So here, buy it from me, Don. So now at least we have one person in charge; that might help. And so there is one guy that can say 'yes' or 'no.' Don owns that name — he is the sole owner of the name DOKKEN. So I'm gonna approach it like I'm working for him, which I am anyway. I'm gonna say, 'Okay, it's your ball. What are we doing?' And when he calls the shots, I'm gonna go ahead and do it. Where I think Jeff and George probably thought, 'Oh, we're just gonna get back together, just like old times.' And no, I don't think that's ever gonna happen, because Don knows he owns it all now. And he is the boss. I mean, he signs my check. [Laughs] You know what I'm saying?"

Surprisingly, Brown also expressed uncertainty over whether a proposed reunion of DOKKEN's classic lineup would result in higher concert attendances for a band that still plays sporadic shows every year.

In a recent interview with The Washington Times, Don was asked what he and George fight about, Don said: "I finally realized what it was all about when we played a reunion tour of Japan in 1995. It all started again: him playing with his back to the audience. Every time I talked to the audience, he would make these little noises with [his] guitar like a child. I said, 'What is the problem? What can I do to make this work?' He pointed at the 20-foot backdrop hanging behind that read 'Dokken' and said, 'That's the problem. The name." He continued: "It's my name, but it's also the band's name. Nothing you can do about it."

All the members of DOKKEN's classic 1980s lineup reunited on stage for the first time in more than a decade on November 29, 2009 at the House of Blues in Anaheim, California.