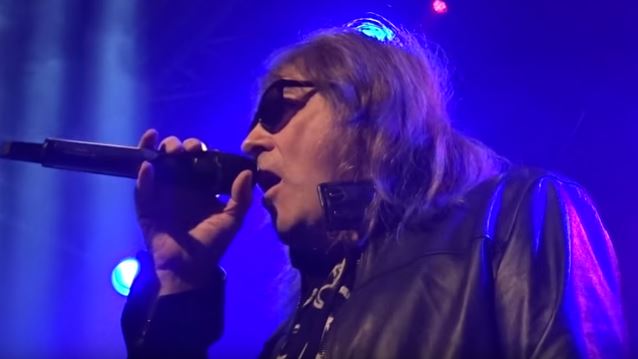 Niclas Müller-Hansen of RockSverige.se recently conducted an interview with DOKKEN mainman Don Dokken. An excerpt from the chat follows below.

RockSverige.se: Do you ever get nostalgic about the good old days, the '80s, when you still sold records?

Don: Yeah, I mean, I don't know what's going on now? The Jay Zs that are billionaires with their own cologne and their own vodka and you have these stupid girls with big fat asses, the Kardashians. Why are they famous? They're famous for being famous. What do the Kardashians do? Nothing. They sleep with basketball players and they make babies and they argue on TV. It's really stupid and embarrassing. It's changed. Back in the day, it was real movies and you watched MTV and it was great. When MTV came along, it was amazing. There was no commercials, no Kardashians, no reality TV. It was just music. That helped the band a lot. We probably got lucky that we came out when MTV came out, to launch us in. Now there's no radio. It's owned by Clear Channel in America and they only play what some girl in New York says. The only time you can hear DOKKEN is on SiriusXM satellite radio on Hair Nation. I said I wasn't gonna make another record and then Jon [Levin, guitar] said, "Why not?" It's because we like to do it. It isn't about the record sales, because I think that everybody who knows me personally knows that I don't need the money. It's not about money. I feel bad for other bands from the '80s. They made a lot of money, millions, and they have nothing. I can't say who, because it's not my place to talk badly about anybody. They have nothing. There was the partying, the strippers, the wives. Alice Cooper says, "They complain about how they marry a stripper and she took all the money. She's a stripper. You should've known that when you married her. Thay're not exactly doctors or lawyers, they're strippers, so don't complain if she takes your Ferrari." But it's nice to be able to play music because you want to. Two weeks ago I played in Quebec with SLIPKNOT. DOKKEN and SLIPKNOT, hhmmm? Kinda strange, but the guys in SLIPKNOT were watching us.

RockSverige.se: Everybody's writing books these days. Have you ever thought about doing that?

Don: Yeah, I have a standing offer and two companies have offered me quite a bit of money to write my autobiography. The problem is that if I write my autobiography, people wanna hear the dirt and I don't wanna write about that. Why? It doesn't serve me to say… We're one of the oldest bands, we came from Sunset Strip, I played with VAN HALEN in '77 and I know a lot about a lot of bands and I've seen a lot of things, but why talk badly about it? Like Bobby Blotzer [RATT] who made up this bullshit story. It says in his book that I slept with his wife. I never slept with your wife. I'd like to sleep with your wife. But the truth is, Bobby, she wasn't your wife anymore, so if I wanted to sleep with her, I would've. You don't own her. I don't see the point. MÖTLEY CRÜE did very well with "The Dirt" and they talk about heroin overdoses and such, but I don't have those stories. I never did drugs. I could write about a lot of things I've seen. Memories from the BON JOVIs and the WHITESNAKEs and the DEF LEPPARDs and all that. That's why I haven't done it yet. I'm gonna write a book, but it's not gonna be full of shit. I don't see the point in talking badly about people in a book.