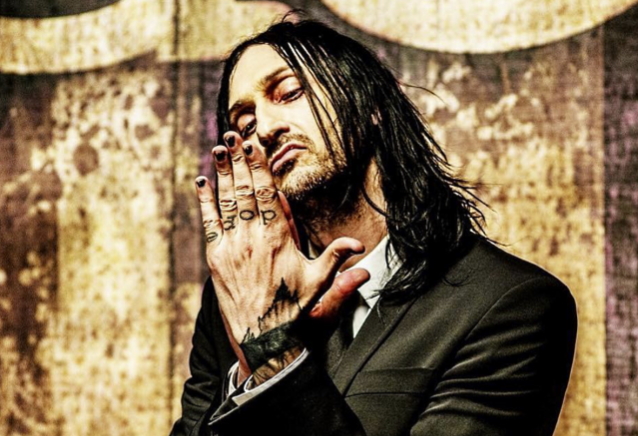 New York City electro metal pioneers DOPE will release their seventh studio album, "Blood Money Part Zer0", on February 24, 2023. The official music video for the LP's latest single, "No Respect", can be seen below. The cinematic visual is a punishing piece that is reminiscent of some of the most memorable scenes ever caught on film.

Taking pages from Quentin Tarantino's "Reservoir Dogs" and Eli Roth's "Hostel" series, the video depicts a violent interrogation taking place inside of an old garage, which ultimately ends in a fiery conclusion. The scene unfolds as the band performs the nitro-fueled song and frontman Edsel Dope lyrically proclaims: "You get what you deserve, and in the end you'll burn." The teeth-excising/finger-removing villain is played by Derron Ross — acclaimed Hollywood stuntman and video game visual effects supervisor. Ross has worked on "Deadpool", "Call Of Duty: Black Ops Cold War", "Apex Legends" and "Bloodshot", to name a few. The visually captivating video was directed by Edsel and co-directed by Matt Zane.

Edsel states: "It's funny. Most people watching the video will assume that Derron is playing the role of a villain, but he's actually playing the hero. The guy that we set on fire was guilty of some deplorable shit. In the end, he got what he deserved."

In a move to demonstrate the bands sincere appreciation to their loyal fanbase for more than two decades, DOPE is giving away "Blood Money Part Zer0" for free digitally. Longtime fans, curious listeners and people that enjoy gratis music can sign up to download the album for free on the band's web site. A physical pre-order will also be available on the band's web site for fans that want to purchase the new album in various physical formats.

DOPE recently released an introspective infomercial which doubles as a behind-the-scenes look into the real life of Edsel, his private life, and his many ventures outside of DOPE. A very private person, virtually inactive on social media, Edsel is intentionally secretive about what he does with his time between records and tours. This video serves as a direct message to the fans, inviting them to see behind the curtain of the mysterious man, whose creativity they have supported for years. In the end, the video is ultimately an introduction to "Blood Money Part Zer0" and will feature teaser clips from the music videos for "Believe" and "No Respect", but is also so much more.

DOPE will hit the road in 2023 in support of "Blood Money Part Zer0" as part of the "Rise Of The Machine" tour with STATIC-X and FEAR FACTORY. The 42-date trek kicks off February 25, 2023 in San Francisco, California and wraps up April 15, 2023 in Los Angeles, California.