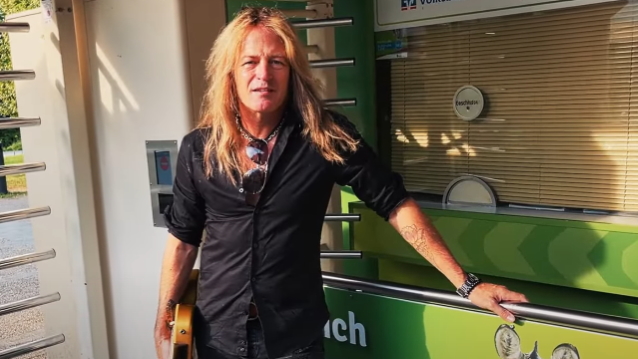 In a new interview with "The Neil Jones Rock Show" on TotalRock, guitarist Doug Aldrich, who was a member of DIO for a short period between 2002 and 2006, was asked if he has seen "Dio: Dreamers Never Die", the first-ever career-spanning documentary on the life and times of legendary metal icon Ronnie James Dio, and whether he was approached to take part in it. He responded (as transcribed by BLABBERMOUTH.NET): "I did see it. I went to the premiere. And there's a couple of photos of me in it, and there's a small little blip where I say 'Ronnie's amazing' or something.

"I filmed a whole bunch of stuff — I mean, I probably spent, like, two hours [being interviewed for the documentary]," he explained. "And one of the cameramen came up to me at the premiere, and he goes, 'Man, you outtakes, the stuff that didn't make it, was so killer.' And I remember what I did. I took the guys in my studio and played them [an unreleased] track, a demo that Ronnie had done. He wanted me to put a solo on it. And he had done the bass and guitar and sang. He played rhythm guitar and played bass on it and Simon [Wright, then-DIO drummer], I would imagine, did the drum programming on it. But it's a haunting tune that nobody's ever heard before. And I played it for them. It didn't make it into the movie.

"The movie is a very upbeat, uplifting film about Ronnie's life," Doug added. "There's so much to cover, I can imagine that, first of all, maybe they wanted to stay away from the stuff that was gonna be too emotional. And also there's only so much time. The movie, I think, is pretty long already, so imagine everybody's interviews being all in there; it would be a 24-hour movie."

The full interview can be heard on "The Neil Jones Rock Show" on TotalRock.

Nearly two years ago, Aldrich told Danny Stoakes that Dio was, in his opinion, "the best heavy metal singer ever. There's a lot of great ones — Rob Halford [JUDAS PRIEST] and Bruce Dickinson [IRON MAIDEN]. All these guys — Biff Byford [SAXON] — they're all killer, but Ronnie, for me, that's the guy that… That [BLACK] SABBATH album was so incredible, the 'Heaven And Hell' album."

"Dio: Dreamers Never Die" will have its television premiere on Showtime on December 1. It will also be available to stream via the Showtime app.