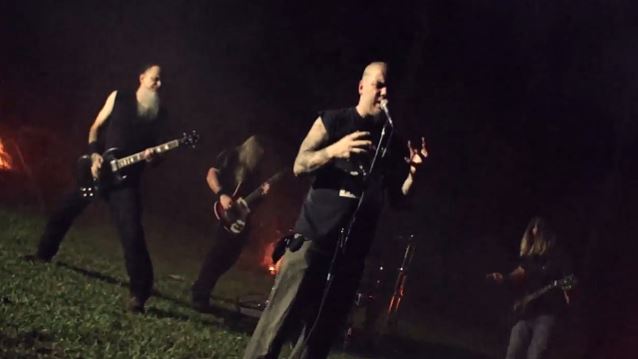 DOWN's video for the song "Conjure" can be seen below. The haunting and twisted ode to '70s horror films was directed by JM Stelly and Chris Trainor at Lab Productions. Stelly previously worked with CORROSION OF CONFORMITY and Suicide Girls, while Trainor has collaborated with GWAR, PHILIP H. ANSELMO & THE ILLEGALS, EYEHATEGOD, and is the producer of Housecore TV.

"Conjure" is taken from the band's latest EP, "Down IV - Part Two", which sold around 10,000 copies in the United States in its first week of release to debut at position No. 23 on The Billboard 200 chart.

Speaking to Revolver magazine, DOWN frontman Philip Anselmo stated about "Conjure": "'Conjure' is basically the old adage of be careful of what elements are hovering around you at all times, and be careful what you want out of life and what you bring into your life, because a lot of times it might seem crystal clear and the right thing, whatever that thing may be, but in reality it's a trap waiting to happen or to be sprung. So it's basically, 'be careful what you wish for,' something like that."

"Down IV - Part Two" was released on May 13, 2014 via Down Records/ADA Music. Tracked at Nodferatu's Lair — Anselmo's home studio — and produced by Michael Thompson, Anselmo and DOWN, the EP was the eagerly anticipated sequel to "Down IV - Part One".

Regarding what he contributed to "Down IV - Part Two", Anselmo told Revolver: "I'm a riff-writin' motherfucker. But I will say, on this last DOWN record, honestly, it feels like this is the one that I've least been a part of, as far as writing too many riffs. But I did write a few riffs on this one. But shit, man, I’'m going to have to give riff of the record to Jim Bower [DOWN drummer] on 'We Knew Him Well' — that's a New Orleans swayin' motherfucker right there."