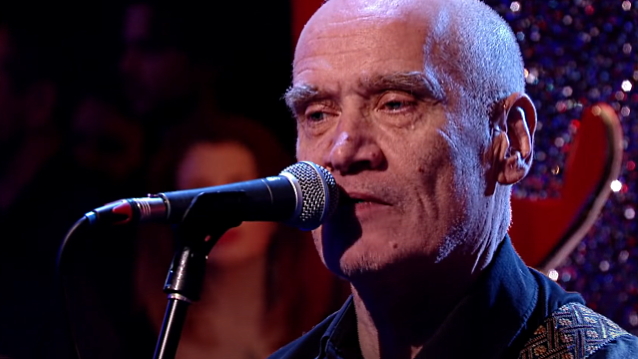 Wilko Johnson, guitarist and vocalist of British rock band DR. FEELGOOD, has died at the age of 75.

News of Johnson's passing was confirmed on his social media pages early this morning. The message states: "This is the announcement we never wanted to make, & we do so with a very heavy heart: Wilko Johnson has died. He passed away at home on Monday 21st November. Thank you for respecting the family's privacy at this very sad time. RIP Wilko Johnson."

The original DR. FEELGOOD guitarist, known for his distinctive chopping guitar style, found further fame on TV in "Game Of Thrones" (playing mute executioner Ser Ilyn Payne in the first and second seasons),and also rose up the charts once more after teaming up with THE WHO frontman Roger Daltrey on hit 2014 album "Going Back Home", which features incendiary re-workings of songs from Wilko's DR. FEELGOOD days, including "All Through The City" and "Going Back Home".

Wilko was diagnosed in late 2012 with terminal pancreatic cancer. Despite the doctors' predictions, he continued to perform with a new zest for life. In 2013, Wilko announced that, thanks to a second opinion and subsequent life-saving surgery, he was cancer-free. In 2014, he released "Going Home", which experienced significant commercial success and critical acclaim.

Speaking on the "Chris Evans Breakfast Show" in 2014, Johnson said: "I think it took about 10 or 11 hours or something and they took this tumor out of me. This tumor weighed three kilos; that's the size of a baby. I'd been carrying this thing on stage with me all year. My guitar used to stick out. My guitar used to rock on this tumor. Rocking away like a rocker. So, no, I shouldn't be here at all."

In 1976, one year before Wilko's exit from the band, DR. FEELGOOD's "Stupidity" album reached No. 1 in the U.K. He then joined IAN DRURY AND THE BLOCKHEADS, and went on to release his own music.

In a 2017 interview with Classic Rock, he said: "I'm a miserable so-and-so. The only time I'm happy is when I'm playing, so that's what I'm going to do. For as long as I'm still able to do so, playing music will fill my remaining allotted years."

Earlier today, Daltrey stated about Johnson: "More than anything Wilko wanted to be a poet. I was lucky to have known him and have him as a friend. His music lives on but there's no escaping the final curtain this time. So it's goodnight to Mad Carew, the uncompromising Bard of Canvey."

This is the announcement we never wanted to make, & we do so with a very heavy heart: Wilko Johnson has died. He passed away at home on Monday 21st November. Thank you for respecting the family's privacy at this very sad time. RIP Wilko Johnson.
(Image: Leif Laaksonen) pic.twitter.com/1cRqyi9b9X

We're sorry to report that Wilko Johnson passed away on Monday 21 November. A message on Wilko's Twitter page states, "...