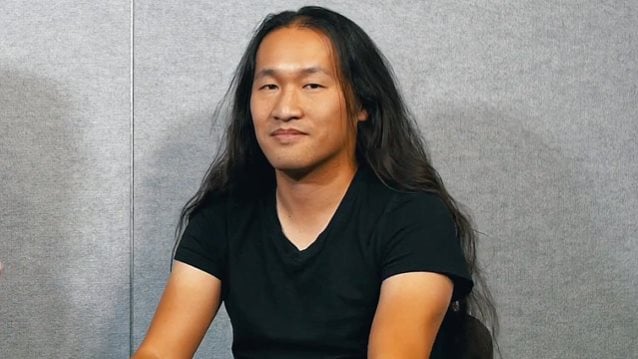 Levi Seth of Australia's Sticks For Stones recently conducted an interview with guitarist Herman Li of multinational metal band DRAGONFORCE. You can listen the full chat below. A few excerpts follow (transcribed by BLABBERMOUTH.NET).

Herman: "I would say it's a continuation of DRAGONFORCE. We're always trying to add new elements to our music while keeping the same sound and, of course, keeping the melodies, the speed, and energy, of what we've built our signature sound on. With the new album, you get all the elements, but we tried to add new stuff in there. We even have a really long, epic 12-minute song now. Fans have been asking for us to make it, so now we've finally done one."

On early accusations that the band was speeding up their guitar playing in the studio:

Herman: "Yeah, it's kinda funny. I still read it on the Internet these days: 'Do they speed it up? Do they speed it up live and on the stage?' We always say, 'Come to a show to see us do the magic on you.' To be honest, it was weird for me that people thought it was sped up. I heard music that was fast way before our existence. We just do it in a weird way. We run around onstage and jump on trampolines and play fast solos at the same time. It was a fun thing we added to it."

On how he developed his guitar skills:

Herman: "It's definitely practice, practice, practice, unfortunately. There's no magic formula to getting your fingers up to speed. I'm always trying to find a way to be better at what I'm doing. Be tighter, but more exciting, make it more fun. There's not a limit to do it. Sometimes I think 'I did that solo live while jumping up and down continuously for 60 seconds. How cool is that?' The solo didn't actually get any better, but it was more fun while doing it."

On whether he plays other styles of music outside of metal:

Herman: "When I'm just at home playing the guitar, I like to put on nice, jazzy, fusion guitar music or that kind of stuff. It's a different kind of music, so I play along and jam along and improvise. I like to do that for fun, but I'm not really that kind of guitar player. Where I can be creative is in metal, that genre, that's my bread and butter, as you would say. Since I'm Chinese, my rice and noodles. [Laughs] But I really do like other guitar music."

On whether it's easier to play DRAGONFORCE songs live than it was ten years ago:

Herman: "We are definitely better live than ten years ago. I would say ten years ago, sometimes we had a bit too much fun on tour. I got to admit it. We had one too many too many drinks the day or the day before, so we were a bit tired. I also would say we were not as organized back then, we were just having fun, just having a blast. We never thought we would be doing this for a living. We were just going out there 'Oh, we get to tour around the world. Cool. Let's do that.' We're not as prepared as we are now. We've toured the world so many times, now when we play, we can hear what we're playing so we can perform the best we can. In the old days, we had great shows, but certain shows, unfortunately, weren't perfect every time. We're definitely better than we've ever been."

On the difficulty of playing their songs live:

Herman: "With DRAGONFORCE music, you can't get away from things so easily if the technical part of the setup, to hear ourselves, to play comfortably, isn't at a good level. The music is so fast. If the sound isn't good onstage, it's much more difficult to keep in time and play with the band compared to a slower pace kind of music. Of course, there's other kinds of music like death and black metal who play fast, but we also play very melodically and that's much more challenging sometimes, I would say, if you don't have good sound. Fortunately, now that we have great sound onstage with the equipment and in-ear monitors where we can hear everything wherever we go, there's also the experience now. We're able to get through gigs even when something goes wrong. Sometimes it's hard to control this crazy gear."

"Reaching Into Infinity" will be released on May 19 via earMUSIC. The follow-up to 2014's "Maximum Overload" will mark the band's third full-length studio release with singer Marc Hudson, who joined the group in 2011 following the departure of original frontman ZP Theart (now in SKID ROW).