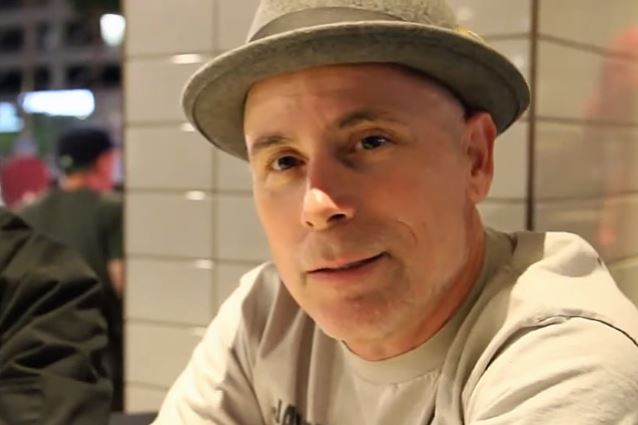 William Richards of Metal Wani recently conducted an interview with former ANTHRAX and current ARMORED SAINT singer John Bush. You can listen to the full chat below. A few excerpts follow below (transcribed by BLABBERMOUTH.NET).

On whether ARMORED SAINT is thinking about a follow-up to 2015's "Win Hands Down":

John: "We haven't really collectively started working on anything. Sure, all the guys are accumulating some stuff in their minds. I have a lot of lyrical ideas written down, but we haven't started writing any songs yet. ARMORED SAINT, sometimes, we don't move at the quickest pace. I think it would be a good idea if we wanted to make a new record to move on it a little quicker. I've said numerous times I'd rather have the quality of the material than feeling pressured to put out something in a certain amount of time be the primary motivation for it. That being said, we're no spring chickens, I ain't going to lie. Trying to wait ten years, five years for a new record, it's probably a little bit too long. If we do make a new record and if we can try to make the material be as high quality as 'Win Hands Down', then it would be cool to be able to get something out sooner than later. That being said, we haven't worked on anything yet."

On how much album sales and touring income affect the band's future:

John: "We never really made a lot of money throughout the history of the band. I wish we did sometimes, obviously, because that's everybody's objective is to do things your way and to earn a living. But the reality is that we never really have. From the very beginning, we've always been just able to make ends meet. I think that's the boat we've been in and that's the boat we're in, and that being said, it's great to still be able to make records and do some shows and be able to be a functioning group 30 years in. When we started out, we were wet behind the ears, 20-year-old kids, we thought we were taking the world by storm, then you have a couple things that happen in your career and it humbles you, then you get a new perspective on things. We've been humbled a lot in our lives, which is fine. It builds character and here we are now. I think we're actually quite closer as a group than we ever were, quite honestly. I think we're more on the level with each other and we deal with things as-is. That being said, we trudge on. We know that we just want to make great music and have some killer performances and demonstrate that we're a pretty unique group. It's all the same guys in ARMORED SAINT who have been here the whole time in the band with the exception of [deceased guitarist] Dave [Prichard]. We use that as a catalyst to go on. We're not sitting here going 'Okay, if we make another record, we can get X amount of money. You can get a boat and you can get a house.' That's not the way it works. I wish it did. Maybe I can get a nice jacket… I don't know, get a nice pair of pants, whatever, a lot of my clothes cost 20 bucks. I think the real reason behind what we do now is to make high-quality music, obviously in our opinion is that what it is and have a lot of fun. You can't emphasize the amount of fun and enjoying this and that's one of the main things that is behind it, quite frankly. Do we want to earn some money? Of course. Who doesn't? But like I said, this isn't something that is enabling me to go and buy a new beach house or live on a beach. That's not the reality of it."

On whether the world's current political climate hinders their ability to tour:

John: "It hasn't affected us at all at this point. We had a little bit of internal differences that we ironed out. I certainly have a lot of opinions, but I feel like my opinions aren't something that I should express in a soapbox kind of way. I've always been somebody when writing lyrics, I try to write things… I just try to have people read between the lines about what I'm trying to say. I'm not putting anything out there in black and white. I try to make it where you have to figure out what I'm trying to say. Some songs are a little bit more specific than others when it comes to lyrics. Obviously, I'm a big advocate of the environment simply because I have kids and I want to take care of the planet. I want to hand off the planet that I think is better than I was the recipient of getting. It's an important thing. I'm not going to be somebody who says 'This is wrong and that is right' through my music. That's not the kind of band we are. We've never been a big political group in terms of being very specific about what we say. I think we should remain that way. Everybody is inclined to how they feel and not even within the band we all agree, but we don't use it as a way to get our agenda across. That's not the way I want to do it. I surely don't want to alienate any particular possible fan because of a political belief. If you're Ted Nugent and you want to do that, more power to you. Jay-Z, you want to do that, hey, more power to you again. But I don't want to do that. That's not my goal. We probably have fans who are on both sides of the political fence and that's okay. I don't know; nothing's affected us as far as a band and playing and touring and anything like that with the new president and new administration. I doubt it will."

After ARMORED SAINT drummer Gonzo Sandoval — who, like his brother and ARMORED SAINT bandmate, Phil Sandoval, is of Mexican descent — publicly came out in support of Donald Trump a few days prior to the presidential election, his bandmates released a statement via the group's Facebook page in which they distanced themselves from his views.