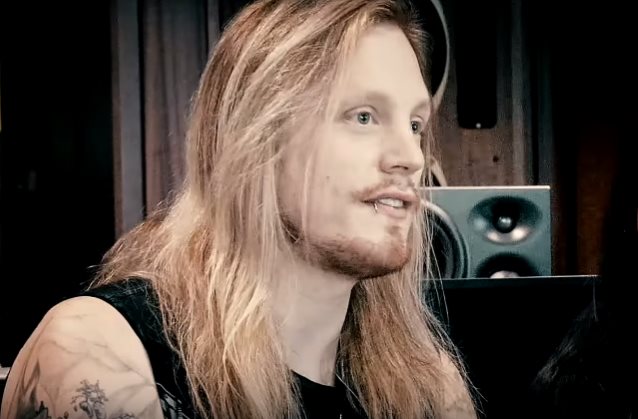 Alex from Heavy New York conducted an interview with frontman Marc Hudson of extreme power metallers DRAGONFORCE prior to the band's July 20 show at the Highline Ballroom in New York, New York. You can watch the full chat below. A few excerpts follow (transcribed by BLABBERMOUTH.NET).

On the touring cycle for the band's new "Reaching Into Infinity" album:

Marc: "It's been really cool. Not only we're getting really good reviews from everyone who's listened to it, but playing the songs live as well. They're coming across really well. We're getting requests for songs we haven't considered playing yet. Apparently, people like it. They're a lot of fun playing live."

On his approach to recording "Reaching Into Infinity":

Marc: "It was a bit easier because I basically made the decision that I wanted to do the vocals from home. I had my own studio set up. I said, 'I want to spend more time on this. I don't want to be rushed.' If you're in a studio and other people are telling you what to sing, it's not quite as organic as if you do it yourself. This time, I was left to my own. They said, 'Yeah, go ahead. Record it and we'll see what happens.' Therefore, this is the best vocals I've done on an album. But yeah, songwriting-wise, it was still Fred [Leclercq, bass] and Sam [Totman, guitar] doing it."

Marc: "It's mostly the second one, to be honest [where Leclercq and Totman provide vocal melody instructions]. From the beginning, Sam's been writing most of the stuff and he's been doing the vocal melodies as well as all of the guitar stuff. Now, Sam and Fred are working together. Again, when you write a song, you write with the vocals being the main focus. By the time the song gets to me, they're like 'Yeah, I want the vocals to be exactly like that.' I'm like, 'Okay, cool.' The thing is, there's always some leeway. I can sing something else and they'll go 'Oh shit. I didn't think about that. That's actually better.' Here and there, make some changes and stuff and put my own twist on it. But, ninety percent of the time they're already like 'That's what I want. That's the catchiest I can think of.'"

On whether the band's music can appeal to multiple audiences:

Marc: "Our music is still extreme. It may be melodic and stuff, but it's just as extreme, really, when you think about it, as all the heavier things like you said, CANNIBAL CORPSE and stuff like that. We're still playing two hundred and twenty bpm [beats per minute] in some songs or two hundred and forty sometimes. I think that's probably one of the things that crosses genres. People who like musicians pushing things to the extreme, that isn't just if they're into death metal, they can still appreciate the drumming that we're doing or say, some of the riffs we're doing. Even death metal vocals I'm doing in some of the songs now. There is this crossover thing that works pretty well."

On the U.K. metal scene:

Marc: "I'm not even the best person to ask about that. I live there, but I can't remember the last amazing band that came out of England in the last five years or so. But, I know the whole 'British New Wave of Heavy Metal' [NWOBHM], that all came from us. But, new music-wise, I'm too busy touring and stuff. I don't even know what's going on right now."

DRAGONFORCE is continuing to tour in support of "Reaching Into Infinity", which was released on May 19 via earMUSIC. The follow-up to 2014's "Maximum Overload" is the band's third full-length studio release with Hudson, who joined the group in 2011 following the departure of original frontman ZP Theart (now in SKID ROW).