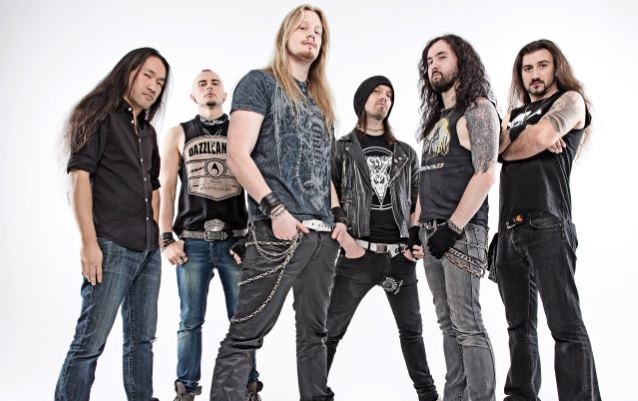 A cover version of the Johnny Cash classic "Ring Of Fire" by British epic power metallers DRAGONFORCE can be streamed using the SoundCloud widget below. The song is taken from DRAGONFORCE's new album, "Maximum Overload", which will be released on August 19 in North America via Metal Blade and August 18 in Europe through earMUSIC, the Hamburg, Germany-based international rock label which is part of Edel Group. The CD was recorded at Fascination Street studios in Örebro, Sweden with Jens Bogren, who has previously worked with OPETH, THE DEVIN TOWNSEND PROJECT, AMON AMARTH, KATATONIA, SOILWORK and SYMPHONY X, to name a few. It marks the band's first-ever album involving an outside producer, having historically opted to record themselves in association with Karl Groom.

Guitarist Sam Totman explained how the "Ring Of Fire" cover came about: "Just before the last Australian tour, our manager suggested it might be interesting to do a cover for the next album, something we've always refused even to consider. Because we had all had a couple beers, every bandmember wrote down three songs each and we compared them all, just for a laugh. I wrote down 'Ring Of Fire' by Johnny Cash, an idea which the rest of the band loved, so we've DRAGONFORCE-ized it."