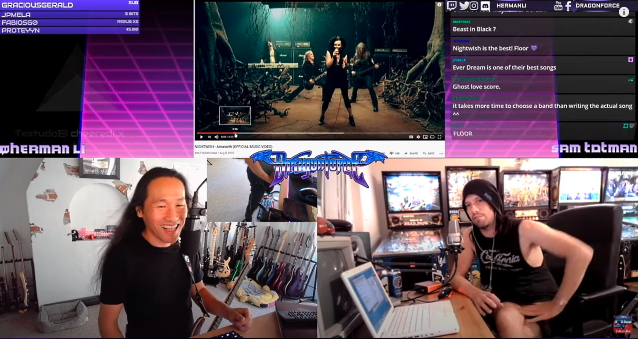 Nearly two months after attempting to write a SABATON-style and a ALESTORM-style song in 10 minutes, DRAGONFORCE guitarists Herman Li and Sam Totman returned to Twitch to take a stab at composing a song in the vein of Finland-based symphonic metallers NIGHTWISH. Video of the resulting session has since been uploaded to DRAGONFORCE's official YouTube channel and can be seen below.

In a statement accompanying the YouTube release of the video, DRAGONFORCE wrote: "DRAGONFORCE live attempt to write a @Nightwish song in 10 minutes, with guitarists @Herman Li & Sam Totman on Twitch. Is this a livestream fail? Which era of NIGHTWISH is this song? Tarja Turunen, Anette Olzon or Floor Jansen? How will NIGHTWISH rate this song if they hear it? Will they find it funny or hate it? Hit LIKE, TAG & SHARE to NIGHTWISH to let them know so we can find out! What bands should we do next? We already made songs for SABATON and ALESTORM."

Li recently told Nuclear Blast's "Saturday Night Lockdown" that he and his bandmates have stayed creative during the coronavirus downtime.

"We played our first show [in support of our eighth full-length LP, 'Extreme Power Metal'] on the album release date [last September], which was on TwitchCon, which is a Twitch convention," he said. "And we got that streamed to, like, 1.7 million people. Everything started out great — it was awesome. We had a sold-out tour happening. Everything was going well. We were gonna film a music video for every single DRAGONFORCE song on the album, and we got halfway through it, and COVID-19 happened. So the tour stopped. And some videos, we can't complete them. We filmed all of it, but we need some more footage. So we've got videos on hold now. And instead, we're writing a new album. Why not? Just like everybody — you just write a new album when you're sitting at home. And strangely enough, it's almost finished. [Laughs]"