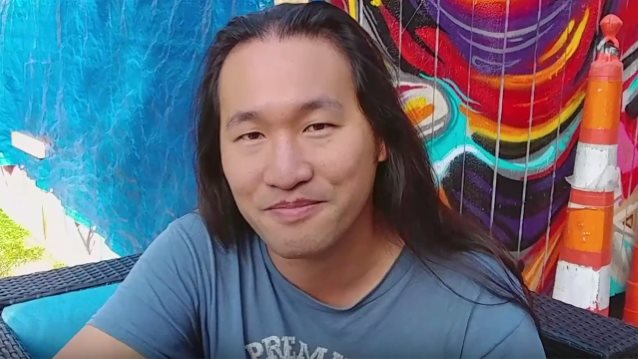 DRAGONFORCE's HERMAN LI: 'I Don't Waste My Money On Things'

Bloodrock Media's Hobbes Caltous recently conducted an interview with DRAGONFORCE guitarist Herman Li. You can now watch the chat below. A couple of excerpts follow (transcribed by BLABBERMOUTH.NET).

On the biggest change in his life since DRAGONFORCE first got signed to a record label:

Herman: "To be honest, I [will] kind of give you a boring answer… Most people might give you different answers, but for me, I try to live the same as before I was in a band, signed or not signed. So I don't waste my money on things. I don't buy expensive cars, although I have one or two now, afterwards, but for me, they were like a hobby; I wasn't buying an expensive car to show off. I was just having fun fixing it and doing things like that. But really, I just live normally, the same I've always been, before [we got] signed. I save my money, [am] clever about it and just have a normal kind of life enjoying doing what I'm doing."

On something that he has to bring with him on tour in order to have a good tour:

Herman: "Now, I've finally worked it out — what I need to bring on a tour, more important than my guitar, really, because I could buy a guitar on tour. Well, actually, it's free — I just send an e-mail out: 'I don't have my guitar.' But my pillow; I bring my pillow. Oh my God, I have this pillow. I've been using that pillow since the age of eleven — eleven years old — for years and years. And I decided, if I bring it on tour, I can sleep much better, I can sleep on a plane; I can put my head on it. Now Sam [Totman, guitar] also brings his pillow [on tour]. I mean, my pillow is so crappy — it's completely flat, used up, it's completely dead, but that's what I've been sleeping on all these years, and it's made such a difference. Yeah, you take off… the cover is kind of yellowish now, ['cause] it's gotten so old, but I love it."

DRAGONFORCE is continuing to tour in support of its latest album, "Reaching Into Infinity", which was released on May 19 via earMUSIC. The follow-up to 2014's "Maximum Overload" is the band's third full-length studio release with singer Marc Hudson, who joined the group in 2011 following the departure of original frontman ZP Theart (now in SKID ROW).

DRAGONFORCE's "Reaching Into Infinity North America Tour 2017" kicked off on July 7 in San Francisco, California and will wrap on July 29 in Fort Lauderdale, Florida.