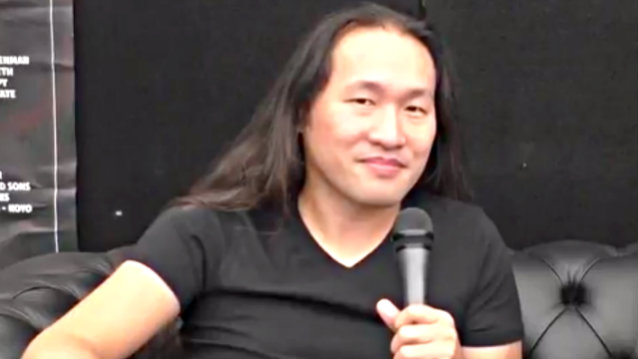 DRAGONFORCE's HERMAN LI On His Solo Guitar Instrumental Project: 'It's Gonna Be Fun'

DRAGONFORCE guitarist Herman Li was interviewed by the "Mike James Rock Show" at this year's Download festival, which is taking place this weekend at Donington Park in Leicestershire, England. You can now watch the chat below.

Asked about DRAGONFORCE's plans for the coming months, Herman said: "We have loads of festivals happening. We're gonna write some new songs for next year to release. I'm doing some solo guitar instrumental stuff. I've always wanted to do some, but I didn't have the time. It's gonna be cool. It's gonna be different. It actually will be slower. The beat may be slower; the guitar probably not slower. It's gonna be fun. It's good to do something different than DRAGONFORCE and record it musically."

Li, who was born in Hong Kong and moved to England during his teenage years, also revealed that he has been learning how to speak Mandarin. "I speak Cantonese anyway — one of the Chinese languages — but I'm trying to be fluent in another Chinese language," he explained. "It's still way easier [than learning a brand new language], because a lot of the words are the same. We tour a lot now in China — I go to China a lot — so it's kind of important to speak the language that everybody in China understands instead of certain regions."

According to Herman, he becomes DRAGONFORCE's de facto frontman when the band plays in China. "The Chinese have their own kind of jokes and all that, just like the British," he said. "So I have to project that — make some insults to my other bandmembers that they don't understand anyway. And everyone's laughing, everyone's loving it."

DRAGONFORCE's fifth album, "The Power Within", which was originally released in early 2012, has been completely remastered and remixed and reissued under the title "Re-Powered Within" in Europe via earMUSIC and in Japan through JVC Victor.

DRAGONFORCE's latest album, "Reaching Into Infinity", was released in May 2017 via earMUSIC on CD, LP and a special-edition CD and DVD. The follow-up to 2014's "Maximum Overload" marked DRAGONFORCE's third full-length studio release with singer Marc Hudson, who joined the group in 2011 following the departure of original frontman ZP Theart (now in SKID ROW).