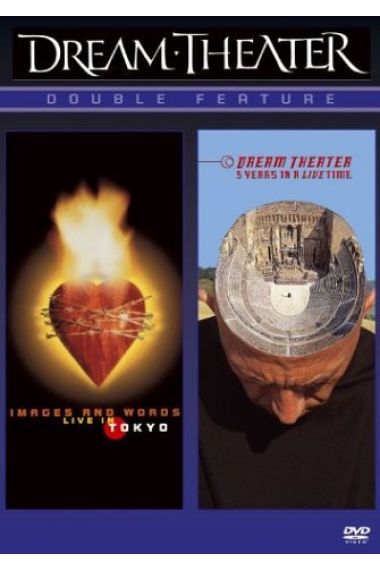 The release date of DREAM THEATER's upcoming DVD reissue of their first two home videos, "Dream Theater - Images And Words: Live In Tokyo" (1993) and "Dream Theater: 5 Years in a Livetime" (1998) has been pushed back to July 13 from the originally announced June 29 date due to "manufacturing delays," according to a posting on the band's web site.

As previously reported, the two-DVD set (view cover here) is "jam-packed with over three hours of footage: live performances along with six music videos and memorable behind-the-scenes interviews."

"Images And Words: Live In Tokyo" is a riveting live performance captured in Tokyo, Japan, during DREAM THEATER's 1993 "Music In Progress" world tour. Also included are the videos for "Pull Me Under", "Take The Time", and "Another Day", plus band interviews and home video footage that takes you behind the scenes on their first world tour, the making of their album and videos, and much more.

"Five Years In A LIVEtime" is a concert collection spanning five years, including shows in Rotterdam and London, plus the 1994/1995 "Waking Up The World" tour and the 1997/1998 "Touring Into Infinity" world tour. It also features the videos for "Lie", "The Silent Man", and "Hollow Years", along with studio footage recorded during the "Awake" and "Falling Into Infinity" sessions.

Copies of the DVD can be ordered from CD Universe.