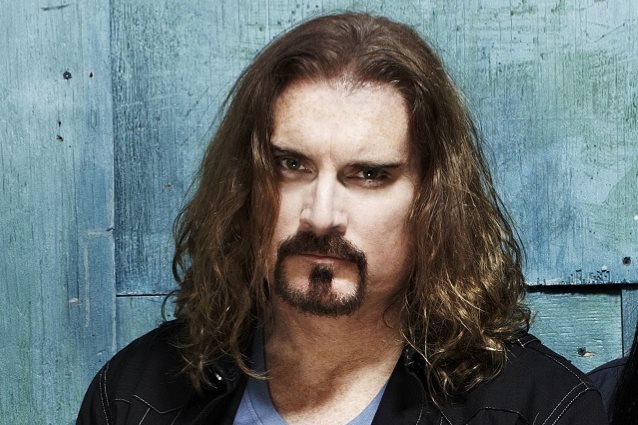 DREAM THEATER vocalist James LaBrie was interviewed by Metal Matt Bolender of CC Rock prior to the group's recent performance in Oakland, California. The full chat can be seen below. A few excerpts follow (as transcribed by BLABBERMOUTH.NET):

On the band's recent "Images, Words & Beyond" tour, in which the group performed their landmark 1992 album "Images And Words" in its entirety:

James: "We were out for almost a year touring behind 'The Astonishing'. What was rearing its beautiful head was the fact that the 25th anniversary of 'Images And Words' was coming up, and we definitely had to — I mean, that was an iconic album for us; it put us on the map globally — so it was something that couldn't be ignored, so we had to pay tribute to it. We had to say, 'This is what we've got to do — most of '17, we have to get behind this album and go out and tour it. So, that's how that came about — it was kind of like, 'Okay, let's phase out 'The Astonishing', and let's bring in the anniversary tour.'"

On how it feels to revisit "Images And Words":

James: "As a band, and as people, we reminisce about those times. It brings up a lot of memories; we're kind of reliving the moments back then when we started out. When we first started out with the 'Images' tour, it was the band and a tour manager in a van, driving from city to city, playing little clubs, showering at the clubs. Days off, we'd get a day room. We paid our dues, and then all of a sudden, 'Pull Me Under' blew up, and everything just exploded for us. It was a completely different world.

"It also puts perspective on where we were — just how precarious a business it is. If 'Pull Me Under' hadn't taken off, I don't think you and I would be sitting here talking today. Granted, we would have continued to tour. Would we have been going to Europe, Japan and everywhere else? Maybe, but to what capacity? I don't know. If the album hadn't been successful, yes, the label might have let us do another album, but if that album had been mediocre in the water too because we didn't get any recognition, I think that would have been the end of us. 'Pull Me Under' really was that catalyst that gave us that template or wave that we were able to ride for quite some time, and allowed us to be doing this 25, 30 years later. We're very fortunate that that did happen.”

James: "I would like to see that DREAM THEATER as an entity, that we'd be doing this for at least another 10-plus years. I really do. I see that everyone is kind of collected — that we're all in agreement to that. I remember saying this to Jordan [Rudess, keyboards] when we were over in Asia — I said, 'I can see me playing guitar and singing DREAM THEATER songs in a more acoustic setting, and playing little intimate clubs and just having fun with it that way,' but who knows what's in the cards? I think it has to always make sense. I think the day that someone's just saying the reason you're going to do something is because of this [makes money gesture], it's all wrong. But right now, I think that we're all having an incredible time out here, and I think that's what we're riding on right now. We're all looking forward to the next album. We all pretty much know where we want to go with the next album, but we have a clear, clear vision of what it needs to be in direction, where we want to take it. That's exciting. That won't be out until '19. '18 will be rest time, and then get into the studio and write and record, and come out with a new album in 2019 and start another tour."