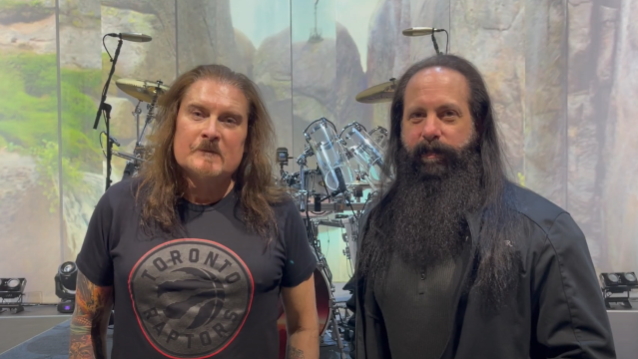 In a new interview with Download Japan, DREAM THEATER singer James LaBrie and guitarist John Petrucci were asked to share the best piece of advice — musical or otherwise — that they have ever received. LaBrie responded first, saying (as transcribed by BLABBERMOUTH.NET): "The best piece of advice I've ever received was from my father, and he said 'respect others and you'll have that back.' So what you put out is what you get back. And also be true to yourself and just be real. I think people that are grounded are inspirational. And that's the way that I've gone through life — is just keeping it real, being respectful and being cool. Period."

Petrucci then chimed in, saying: "As far as advice, I'll, I guess, approach it from a musical front. There was a teacher in high school that told me about the metronome, and it was the first time a musician suggested I practice using a metronome; I'd never done that before. And it was the greatest piece of musical advice because I still do it. And what it did is it helped me to kind of be able to play things eventually that I couldn't play starting out. And playing to a metronome was a great, great piece of advice that I'll never forget. And then the other piece is another piece of musical advice. As a guitar player, one of the things, for me, that was really helpful when I was growing up and learning is I played with a lot of people. John Myung [DREAM THEATER bassist] and I, and Kevin Moore, our original keyboard player, we grew up on Long Island in New York, and everybody played. There were tons of bands and stuff. And I would just go from house to house and do GRATEFUL DEAD jam sessions and [Jimi] Hendrix, and then go to this guy's house who was into the SCORPIONS and metal, and then we'd go to this drummer's house and we'd just do scale sessions and rhythms. Then John and I would get together and learn every IRON MAIDEN song ever written. So playing with other musicians is a really great way to develop yourself as a player. It's not just about staying at home and shedding by yourself. Music is meant to be shared, and it's great getting that experience playing with other people. So I really, really suggest that you do that, if you're not already."

Four months ago, DREAM THEATER won its first-ever Grammy in the "Best Metal Performance" category in the pre-telecast ceremony at the 64th annual Grammy Awards, which was held at the MGM Grand Garden Arena in Las Vegas. DREAM THEATER was nominated for "The Alien", a track from its 2021 album "A View From The Top Of The World". DREAM THEATER's previous Grammy nominations were for the song "On The Backs Of Angels", from 2011's "A Dramatic Turn Of Events" album, and the single "The Enemy Inside" from 2013's "Dream Theater".