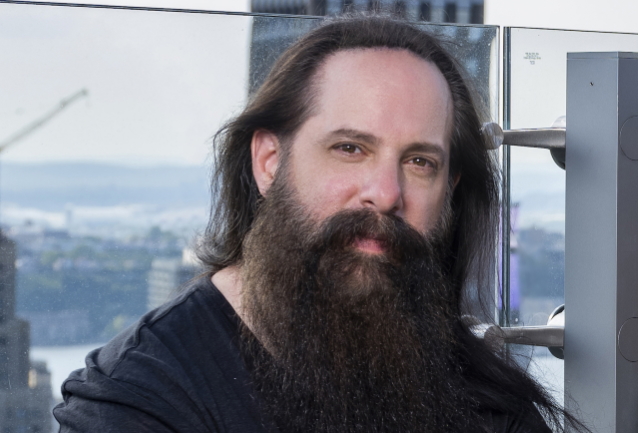 Last month, DREAM THEATER was announced as one of the "Best Metal Performance" nominees at the 64th annual Grammy Awards, which will be held on January 31, 2022, at the Crypto.com Arena (formerly the Staples Center) in Los Angeles, California. The progressive metal legends were nominated for their song "The Alien", the first single from their latest album, "A View From The Top Of The World", which came out in October.

DREAM THEATER guitarist John Petrucci discussed his band's latest Grammy nomination during an appearance on MACHINE HEAD frontman Robb Flynn's "No Fuckin' Regrets With Robb Flynn" podcast. He said (as transcribed by BLABBERMOUTH.NET): "The first [Grammy] nomination we had, FOO FIGHTERS were on there. And they won it. I remember Dave Grohl had said something like, 'Oh, they should have got this,' which I thought was nice. But this time, I don't know if I'm gonna remember all of [the other artists that were nominated], but I think it's GOJIRA and MASTODON [that we are up against], and it's a cool list. I remember there were a couple of years where I was surprised at the nominees — it seemed a little bit strange — but this seems appropriate. So we'll see. It's fun. It's an honor to get nominated. It's cool. Doing what we do and the way that we do it and getting recognized in that world is something that I never would have expected. And now for us, this is the third [nomination], so it's cool. It's a good feeling."

When "The Alien" was first released in August, Petrucci stated about the track: "It's the first one we wrote together. It gives people a window into what it was like when we initially met up after all of those months off. It has the adventure, the untraditional structure, the heaviness, and the hooks. It really set the tone for the album. James [LaBrie, vocals] wrote the lyrics about the idea of terraforming and looking beyond our Earth for alternative settlements. Since we're going beyond our planet, 'The Alien' turns out to be us. I thought it was a cool and creative lyric by James."

DREAM THEATER's previous Grammy nominations were for the song "On The Backs Of Angels", from 2011's "A Dramatic Turn Of Events" album, and the single "The Enemy Inside" from 2013's "Dream Theater".

Last month, DREAM THEATER announced the rescheduled dates for its recently postponed North American leg of the "Top Of The World" tour. The shows will now kick off in Mesa, Arizona on February 2 and run seven weeks before ending in Austin, Texas on March 21. The tour will also make stops in Los Angeles, California; Montreal, Quebec, Canada; New York City and Dallas, Texas, among others, and will mark the first live performances of music from "A View From The Top Of The World". ARCH ECHO will be the opener on all dates in the United States and FALSET will be the opener on all of the dates in Canada.

‘The Alien’ was the first track that we wrote for the new album when we all convened to write last October. We are thrilled to have it be recognized in this way. We are in some amazing company with this year’s nominees and wish them all the best of luck! #Grammys