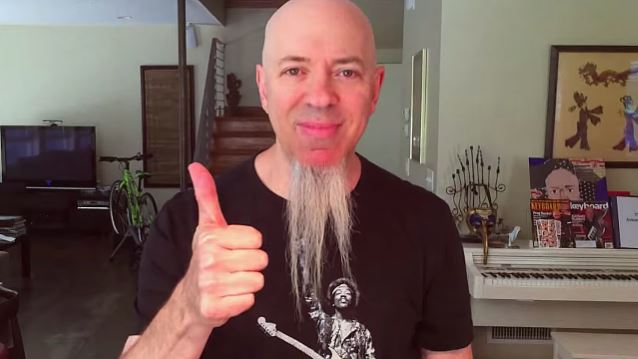 DREAM THEATER keyboardist Jordan Rudess has revealed to U.K.'s Prog magazine that he almost made a guest appearance on PINK FLOYD's classic 1979 album "The Wall".

"Many years ago I had a friend by the slightly unusual name of Blue Ocean," recalled Rudess. "He was a very good drummer; I believe he had been one of the studio drummers for THE MONKEES, playing with them behind the scenes. Anyway, Blue got the job of assembling a marching band that would appear on the song 'Bring The Boys Back Home'.

"I was hanging out at Blue's home one day and he said, 'Come on, man. Come to the studio and watch the recording of the track. You could even be a part of it.' Well, I wasn't a drummer — by that point I'd have been around 18 years old and had long since decided that keyboards would be my life — but I'd played some very basic snare drum when I was in Third Grade. So I went with him to the session. I walked in, someone gave me a drum and some sticks. I'm playing along and having a really good time, but as I'm doing so, I become aware that Bob Ezrin [producer] is looking at me across the room, eyebrow slightly askew, and finally he says: 'I don't think so.'

"After he’d picked me out, I went and sat in the control room and long before anyone else, we got to hear a playback of that track, though, of course, we had no idea of what it meant or where it would fit in the overall puzzle of PINK FLOYD's album.

"I was fine with Bob's decision. I was a very poor drummer. But there's a part of me that still wishes I'd been able to appear on 'The Wall'. That would've been very cool indeed."

DREAM THEATER's thirteenth album, "The Astonishing", will be released on January 29 via Roadrunner.