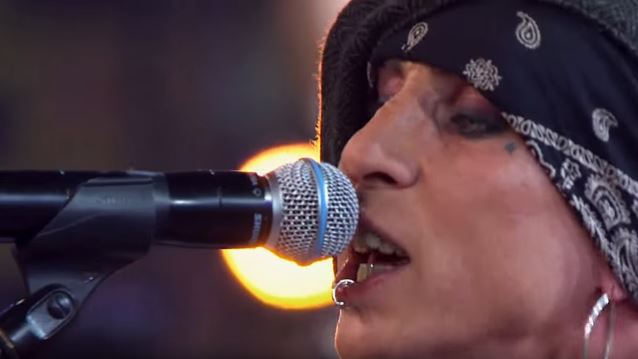 The original lineup of the Swedish garage rock band THE HELLACOPTERS will celebrate the 20th anniversary of the release of its debut album, "Supershitty To The Max!", with an appearance at next year's edition of the Sweden Rock Festival, set to take place June 8-11, 2016 in Sölvesborg, Sweden. Also planned for next year is a special reissue of the LP, which was honored in the "Best Hard Rock/Metal" category at the Swedish Grammis awards (Swedish Grammy equivalent).

Speaking to rock journalist Mitch Lafon for a recent edition of the "One On One With Mitch Lafon" podcast (Facebook page),Dregen stated about THE HELLACOPTERS' future plans: "It's really hard for me to talk about it, because the news came out, so to say, [on October 30], but the news hasn't been with the band for such a long time either."

"There's a lot of bands you go and see — not to mention any names, but, you know, like an old favorite of mine like KISS… Of course, [when] you go see KISS and you enjoy it, of course, but it's never gonna be, like, 'God, I wish I was older. I wanna see it like it used to be in '78 or something.' There's a lot of reunions where you walk out from the show, saying, 'Wow! It was great, but it was better before.' But we're gonna try to prove that that's not the case with THE HELLACOPTERS."

Dregen added: "With the BACKYARD BABIES, it's not that there's gonna be a five-year break again, but I think everybody's satisfied that we have the BACKYARD BABIES as some kind of a mothership. And then I can go out — I can do a solo album and a tour with another band — and then we're always gonna come back to do BACKYARD BABIES stuff. And hopefully the same with THE HELLACOPTERS. Because I know that Nicke, as well, loves the position to play with IMPERIAL STATE ELECTRIC, which is his band nowadays. So maybe we can, you know… I would love… but I'm only talking for myself — I'm not talking for the band, THE HELLACOPTERS — but, for me, it would be amazing to go out and do certain shows. Because it's twenty years since 'Supershitty To The Max!' came out, 2016, but we're only gonna do one show in 2016. But, hey, 2017 is twenty years since 'Payin' The Dues' came out. Hmm…"