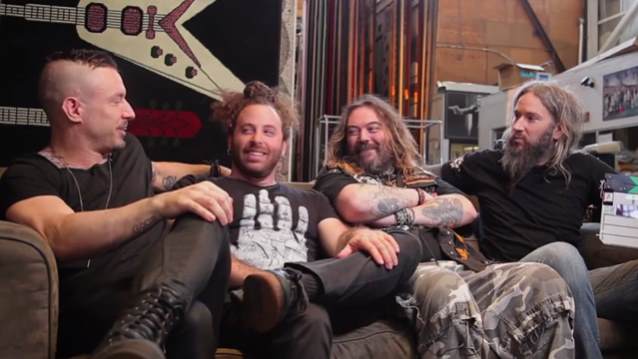 Drummer Dave Elitch (ex-THE MARS VOLTA) will be unable to perform with KILLER BE KILLED as part of this year's edition of Australia's Soundwave XV festival due to scheduling conflicts with his other band, ANTEMASQUE.

Dave tweeted earlier today: "I've been getting a ton of questions regarding @soundwavefest, so lemme set the record straight: I will be playing with @ANTEMASQUE, but... I unfortunately will not be able to play with @KillerBeKilled, as it's logistically impossible as they're on different days."

This year's edition of Australia's Soundwave XV festival is set to take place February 21-22 at Bonython Park in Adelaide and Flemington Racecourse in Melbourne and February 28 - and March 1 at Olympic Park in Sydney and Brisbane Showgrounds in Brisbane.

MetalSucks placed Puciato at #1 on their list of the Top 25 Modern Metal Frontmen, but he also expresses himself through the dark electro-pop of THE BLACK QUEEN, together with NINE INCH NAILS touring guitarist Josh Eustis of TELEFON TEL AVIV and Maynard James Keenan's PUSCIFER. Puciato made a guest appearance in 2012 with MIXHELL, the DJ project of Max's brother, SEPULTURA co-founder Igor Cavalera.

Cavalera is no stranger to collaborations, of course, having invited multiple guests onto SEPULTURA's genre-defining "Roots" and SOULFLY's gold-selling debut album in 1998. One such SOULFLY guest, Chino Moreno, has often joined Puciato onstage with both THE DILLINGER ESCAPE PLAN and DEFTONES. Max was one-half of the incendiary NAILBOMB, together with English record producer and FUDGE TUNNEL mastermind Alex Newport. The pair released one studio album in 1993 and performed a blistering set at the Dynamo festival in 1995.

"We did the song on SOULFLY's 'Omen' and then we started talking about doing an entire album together, the way he had with Alex Newport," Puciato explains. "We eventually got together with some riffs we both had and wrote a bunch more material in a 72-hour blast out in the desert. We left with about 15 demos we made using the same drum machine and four track Max used working on 'Chaos A.D.'"

Cognizant of the reputation both of them have cultivated after working with some of the world's best drummers, Puciato called upon David Elitch, who had toured internationally with the mind-bendingly psychedelic group THE MARS VOLTA. His expertise in everything from jazz to metal has led to live and studio collaborations with a diverse range of major artists including Justin Timberlake, French electronic wizards M83 and Norwegian singer-songwriter Susanne Sundfør.

MASTODON and THE DILLINGER ESCAPE PLAN have toured together many times. During one such tour in the U.S., in late 2011, Puciato was telling Sanders about the new project. Before too long, Sanders and Cavalera were meeting at a festival in South America for the first time: "Hey, I'm Troy. And I think we're in a band together."

The electric chemistry was apparent the first time they all assembled. "Having met, created and recorded an album together, this experience has easily exceeded my initial expectations," says Sanders. "The collective energy and mutual respect for one another eased the entire process and has been very therapeutic for me."

I've been getting a ton of questions regarding @soundwavefest, so lemme set the record straight: I will be playing with @ANTEMASQUE, but...

I unfortunately will not be able to play with @KillerBeKilled, as it's logistically impossible as they're on different days.