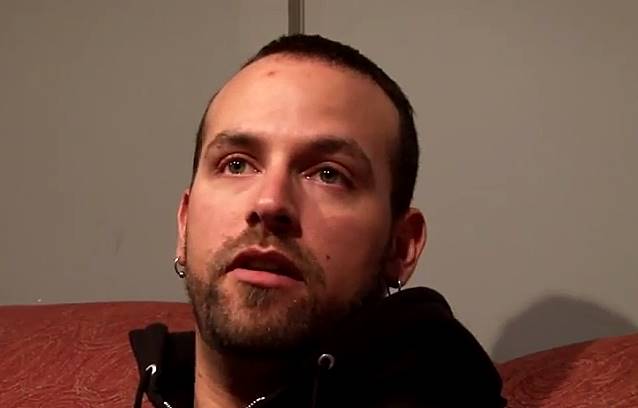 According to Sick Drummer Magazine, drummer Gus Rios has left Florida death metal veterans MALEVOLENT CREATION. He explains in a statement: "After several years, I have decided to part ways permanently with MALEVOLENT CREATION. The simple reason is personal differences.

"I appreciate all of the people I've worked with during my time with the band and want to thank all of them. I'm sure we'll work together again in the future with another band. Most of all, I would like to thank all of the fans who have supported the band! I'm sure you will continue to support.

"This opens me up for bands in need of a touring and/or recording drummer, as well as a full-time position if the situation is right.

MALEVOLENT CREATION recently finished recording its new album. The CD is expected to include the tracks "Corporate Weaponry" and "Face Your Fear", the latter of which can be streamed below. The song was recorded, produced and mixed at Rios' studio, Riversound Productions, except for the vocals, which were laid down with Jim Nickles at his Shredly Studios.

"We are still debating how we are going to go about releasing new music," Gus Rios told Decibel back in August 2013.

"For a band like ours, with 11 albums and more than 110 songs, it's just not making sense to record 10 new songs. We are thinking (still not 100%) that doing EPs might be the way. That way we can concentrate on writing five really good songs and play them all live as well.

"We don't want to be a band that has to rely on its past. We want to write songs that are good enough that people will want to hear them live, as well as the 'classics.' And realistically, we would only do about five songs off of any new album anyway due to the extensive catalog."

Regarding how MALEVOLENT CREATION has managed to retain its musical identity after going through so many lineup changes over the course of the last 20 years, Rios told Rádio Evil: "Since 1997, pretty much every single MALEVOLENT CREATION song anybody's ever heard, me and Phil [Fasciana, guitar] actually wrote. I live in Fort Lauderdale, and so does Phil, and that's the songwriting nucleus of MALEVOLENT. So as long as the two of us are still in the band, it's always gonna sound like MALEVOLENT CREATION, you know what I mean?! That's the consistency of the band — the primary songwriters. And then, of course, Brett [Hoffman, vocals]."

MALEVOLENT CREATION's latest album, "Invidious Dominion", was released in August 2010 in North America via Nuclear Blast Records (in Europe through Massacre). The effort was made available in various territories as a regular CD; digipack with bonus material; and vinyl LP.