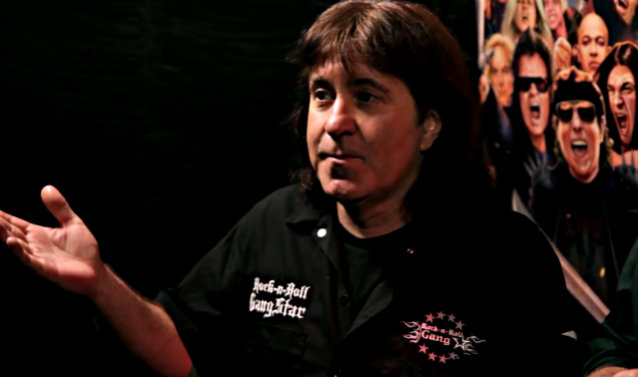 Drummer SIMON WRIGHT Talks About His Time With AC/DC, Working With GEOFF TATE

Metalliville.co.uk: I bet you've been asked this a million times, but how did you meet up with AC/DC? How did you get given that break and where did they meet you? How did they find you?

Simon: Well, they found a lot of drummers. They put an ad in a magazine in England called Sounds. I wasn't really looking, but through one thing and another, it was all sort of like in the paper that said, "Heavy rock drummer required. If you don't hit hard, don't apply." So long story short, I applied and I went down there, didn't know who it was, played to three cover songs, I came home, they called me back and then when I went back… I couldn't afford to go back, so they paid for the taxi because I was broke. So I go back anyway, and I'm taken into this other rehearsal room in the same complex and there's like flight cases with AC/DC on 'em, and I'm, like, "Holy fucking shit, what's goin' on 'ere then?" [Laughs] So I go in, and they're all there and we said hello and just played. I mean, there was no big fanfare introductions, really. It was just, like, "Get on with it and let's work." So we played for like half an hour or 40 minutes and then we sat down for a bit and they just started talking about the next tour and stuff. I turned round to, I think it was Mal [Malcolm Young] and said, "Does this mean I'm in the band?" and he was, like, "Yeah, looks like." So you know, it's all very low key… Itwas a big cattle call. It was a lot of drummers. I'm not trying to shout my own praises. I don't know why I got the gig. Probably because I'm not very tall or something. [Laughs]

Metalliville.co.uk: What shows really stand out in your memory of your time with AC/DC and why?

Simon: When we played Castle Donington with VAN HALEN. That was a pretty tremendous time. I had all my family down and just headlining Castle Donington — it was unbelievable. I went down early to watch VAN HALEN. It was just unreal. I mean, it was in 1984 and I think maybe 3, 4, 5 years before that, I'd been home at home listening to VAN HALEN and now I'm standing at the side of the stage watchin' 'em and then my band goes on after 'em.

Simon: It's really bizarre. A lot of it was surreal. You know what I mean? You get thrown into something like that and you go like, "Wait a minute, that's Eddie Van Halen in the tuning room, in the dressing room, and you get to talk to him. I know many other people too. I remember Phil Collins. It's all so surreal. I got to talk to Phil Collins one time in New York. I really enjoyed Phil Collins' drumming in GENESIS. I always had lots of influences, so to actually meet him and say hello to him and to actually meet him — he didn't say very much, you know, it was a thrill. I think it was two or three nights sold out at Madison Square Garden, so he came along as well and we were on the same record label. It was unbelievable. Another time was when we played Rock In Rio in '85. That was unbelievable. A huge sea of people — 250,000. Just people for miles and miles and miles. It was unbelievable. I was so lucky. Those shows stick in your head. Fantastic.

Metalliville.co.uk: So what's the reason you left AC/DC?

Simon: I'd been in the band, that seemed to me for quite a long time, and it was pretty close to eight years, and I just had other things going on. I just wanted to do more as a player and a musician. It sounds pretty crazy. You're gonna leave one of the biggest rock and roll bands in the world. But it's not always about the money. It's about playing and you are just kinda growing within yourself. It was a gradual process, and I became a bit complacent with what was going on and it was nothing against the band. Their music is brilliant and it always will be brilliant. There's some classic stuff there. They could see that I wasn't 100% behind it and it's no use to a band like that, because they need someone who is 100% behind everything and it was a kind of a mutual, gradual thing. It wasn't a big drama thing or anything like that, and I've been back to see 'em. I think it was three years ago at the (L.A.) Forum and it was on the "Black Ice" tour. There's no animosity about what happened with them or me. Obviously…

Metalliville.co.uk: You needed a change?

Simon: Yeah. It just happened like that. That's just the way it happened, and you've got to move on from there, and luckily I found Ronnie James Dio and played in his band, so it worked out alright.

Simon: It's okay. I got contacted… well, I think Rudy [Sarzo, bass] mentioned something to Geoff because I guess for one reason or another Bobby [Blotzer, RATT] wasn't working out, I don't know exactly why but Geoff called me and he asked me if I would be interested in doing it and I said, "Sure, I would love to do that," and he thought it was a great idea. We did talk a little bit about the progressiveness of QUEENSRŸCHE and he said, "You know, it's kind of a progressive thing and stuff and everything like this," and I said, "Yes, I realize that." I've listened to QUEENSRŸCHE and QUEENSRŸCHE opened up for 'DC back in the '80s.That's where I met Geoff, actually. I said hello to him and everything. We [were] cool. We sat and met with him and he's a super-intelligent guy — a really nice fella. But, you know, I kinda put the phone down and then I kinda went, "Oh, man, what have I got myself into here?" So I started listening and I'm learning and I'm going, "What is this? Wait a minute? Wait — what's going on there?" And I got myself into a little bit of a situation. I was kinda getting bogged down with it. You know, Scott [Rockenfield] is an amazing player. He has his way of playing and I have my way of playing. He has a way, and I have a way, and musicality within drummers is obviously open for interpretation, and that is how the way I felt about it. I said, "Listen, I have to deal with this my way," because…. And we do. Rudy's the same way. They're great players. Me and Rudy, we just captured the best we can — our interpretations of the parts which again are integral to the songs. But we didn't wanna actually copy everything. We wanted to be ourselves. I think we deserve to be ourselves. I think it's important that fans still know that I'm playing drums and Rudy Sarzo's playing bass. So we just kept that momentum going, and me and Rudy just decided to do this the way that we felt we could interpret it best, and we just went out there and said, "Fuck it — [let's] rock! But in QUEENSRŸCHE, it was important that we kept the integral part again and respected the music. Me and Rudy respect the players in QUEENSRŸCHE because there is such a battle goin' on. You know — whatever. We do what we do and they're doing what they should do — they are the band but we have to interpret out way and it seems to be going quite well. A lot of shows are sold out.

Metalliville.co.uk: Yeah because I heard a rumor that Geoff was actually stopping his version of QUEENSRŸCHE, but he's keeping it going.

Simon: Yeah, well, there's been a lot of speculation, but it finally came through a couple of weeks ago about the settlement and it seems that… I think things will be changing. We're doing a farewell tour and it'll be a greatest-hits tour. We've done a greatest-hits tour before, but "Operation: Mindcrime" — we've been doing the whole thing. I'm not a hundred percent sure what is going to be happening after this tour. I know he's got a lot of music recorded and he's thinking about doing another album. He's talked about doing a double album, a triple album. So he's all fired up and ready to write and go, so we'll just have to wait and see what happens. But as far as so far as being with QUEENSRŸCHE, it's been an absolute joy. I mean, some of the playing in some of those songs, it's just really cool. They are brilliant songs, and when you really get into the songs and start learning them, there's a lot of great little parts that have been created. So all respect to the band who created them.

Read the entire interview at Metalliville.co.uk.