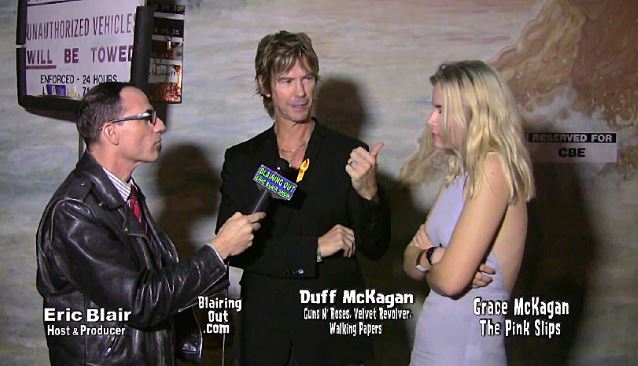 On Sunday, October 26, Eric Blair of "The Blairing Out With Eric Blair Show" conducted an interview with Duff McKagan (GUNS N' ROSES, VELVET REVOLVER, LOADED, WALKING PAPERS) and Duff's daughter Grace McKagan, who plays in the band THE PINK SLIPS, on the red carpet at an evening of art with Billy Morrison and Joey Feldman benefiting the Rock Against MS foundation at Village Studios in Los Angeles, California. You can watch the chat below. A few excerpts follow (transcribed by BLABBERMOUTH.NET).

On reuniting with Axl Rose and the current version of GUNS N' ROSES for some live shows earlier in the year:

Duff: "It was great going and playing those shows with him. We had a good time."

On whether he would consider doing some recording with GUNS N' ROSES again:

Duff: "I never say never to anything, actually, these days. I've kind of learned. You never know what's around the corner. And all that aside, I'm just glad he and I were able to get together and talk about some stuff and then laugh about a lot of other shit that happened."

On the status of WALKING PAPERS:

Duff: "We just finished our second record. We actually over-recorded. We recorded 21 songs, and on the drive here, we were just listening, trying to pare it down to 12."

On what makes WALKING PAPERS special:

Duff: "I think it's a unique band because, number one, [former SCREAMING TREES member] Barrett Martin, the drummer, plays rhythms that are influenced by his time in Senegal and the Peruvian Amazon, and you just don't get that ever. [Laughs] Jeff Angell, his lyrics are hard, from living through it. We have a wacky and truly gifted keyboard player [Benjamin Anderson], and just the whole thing together, we're taking chances. I've never been one to just play safe music and think that's all there is to it. I get to be in a band that's pushing the envelope."

On whether he wants there to be another VELVET REVOLVER album:

On whether VELVET REVOLVER has any potential lead singers in mind to replace Scott Weiland:

Duff: "We played with some guys only two weeks ago, as a matter of fact. All really talented guys, but it's just… We'll know when he walks in the room, I think."