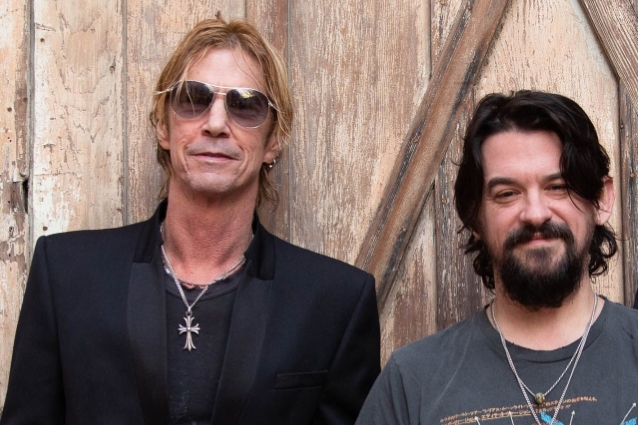 DUFF MCKAGAN On New Solo Album Producer SHOOTER JENNINGS: 'I Have All Kinds Of Plans For Us For, Like, The Next 30 Years'

On April 4, GUNS N' ROSES bassist Duff McKagan and Shooter Jennings — the producer of McKagan's new solo album, "Tenderness" — discussed the album with Scott Goldman during an appearance at the Grammy Museum in Los Angeles. A few excerpts follow (as transcribed by BLABBERMOUTH.NET):

Duff: "Shooter, as far as I knew, had really just come out from Tennessee. He had a rock band — and this is a time when there wasn't a lot of rock n' roll bands going down, and there was a few bands out there kind of saving rock n' roll, if you're me — and my band LOADED played punk rock 'n' roll, and STARGUNN, his band he came out here with, played a show with us. I saw him play some, like, house party. I could tell just by this kid — I didn't know the Waylon Jennings connection — he was just a kid who I saw with a look in his eyes and this band playing rock n' roll. He was, like, a truth-teller. You recognize those few out there that have the real thing. I knew that about Shooter from [the start]."

Shooter: "I was an MTV kid, and I didn't like Nashville. At the time, there was a couple cool rock bands that were stirring around like SCREAMIN' CHEETAH WHEELIES and JASON AND THE SCORCHERS. It was cool, but that wasn't where I wanted to be. To me, if you wanted to play real music, you had to go to L.A. or New York, and all my favorite bands were from L.A., and certainly GUNS N' ROSES. I studied those records, especially the 'Use Your Illusion' records. I thought they were brilliant — the first two records I bought on CD. I remember the first time I saw the 'Welcome To The Jungle' video and Axl [Rose] getting off the bus, and I'm like, 'That's where I want to be.'"

On the origins of "Tenderness":

Duff: "We've known each other for all this time, and I've seen Shooter here and there and rooted for his career and followed his records — [the 2010 concept album] 'Black Ribbons' is one that spoke to me especially — and I had been writing these songs on the road, this ['Not In This Lifetime'] tour we did — this massive road trip around the world four times. Being a columnist for as long as I was, I've learned to become an observationalist, because I always had to write next week's column. At the same time, since I got sober in '94, I've become this avid history reader — an armchair historian, I call myself — and I'll read huge swaths of history from three or four vantage points.

"We were doing this road trip in arguably one of the most interesting times in our history that's going on right now — and no comment either way, because I read too much and see how fast things change and [the] same cycles go through. It's not worth my breath because it's going to pass before we know it. We were rehearsing for the tour, and like everybody else, watching the big three cable news stations. I was getting super-anxious and looking at Twitter and getting super-anxious. We played an American tour, and then we went to, I think, South America, and suddenly I didn't have the three news stations, and I decided not to look at Twitter. My wife and I, when we travel, we do all this nerdy tourist stuff... and what you do when you do that [is] you talk to people. [I] talked to people all across America. We went to Monticello, Thomas Jefferson's [home]; we went to Little Big Horn; we went to [a] World War I museum. Countless places, and you talk to people.

"If you're not watching the news and you're not looking at Twitter, I really recognized as an observationalist that this divide they're talking about... it's not there. I just didn't see it, and the America that I know is the one after 9/11. When that happened, we all came together and we had each others' backs, neighborhood by neighborhood, house to house. The hurricane in Houston — nobody asked who the fuck you voted for. Everybody just came and helped. We get to play these big rock shows around the world. I've seen women in full headdress in Muslim countries rocking the fuck out. If I'm in a bubble, it's a bubble of unity. It's a lot of noise, and I started writing these little observational pieces on this. I had an acoustic guitar on the road with me... and this thing I was writing, the column, became a song — just a three-chord song. I started writing these songs, and I was thinking more Mark Lanegan or Johnny Thunders acoustic, Greg Dulli... I had these songs, this grand idea, but to keep it super-simple and musically serene somehow. Shooter and I talked when I sent him some songs. He understood it immediately."

Duff: "He is impossibly talented [and] is a few steps ahead of you at all times, but he never made me feel uncomfortable. I've played with enough cats that are always ahead of me, or they're thinking about this thing in a totally different way I've never thought about, and Shooter's one of those guys. But he never made me feel like I didn't belong in that studio as much as he belonged there. We did it as two partners doing this record... [he's] extremely talented, very musical, a great songwriter in his own right. I have all kinds of plans for us for, like, the next 30 years."

Due May 31, "Tenderness" sees McKagan reflecting on his experiences traveling the globe over two and a half years on GUNS N' ROSES' "Not In This Lifetime" tour. Encountering heartbreak, anger, fear, confusion and divide on his travels during this tumultuous time in our world history, McKagan channeled a collective hurt into songs of monolithic power.

McKagan and Jennings began recording "Tenderness" a year ago, working out of Station House studios in Echo Park, California, where they wrote and recorded in between McKagan's tour with GUNS N' ROSES and the release of Jennings's eponymous album, "Shooter". "Tenderness" features Jennings and his band along with appearances by The Waters and The Suicide Horn Section (which features Duff's brother Matt McKagan on trombone),among others.

McKagan will kick off a North American tour in support of "Tenderness" — during which he'll be backed by Jennings and Jennings's band — on May 30 at TLA in Philadelphia. 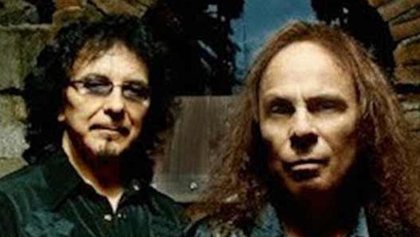 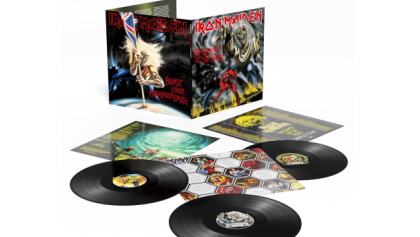