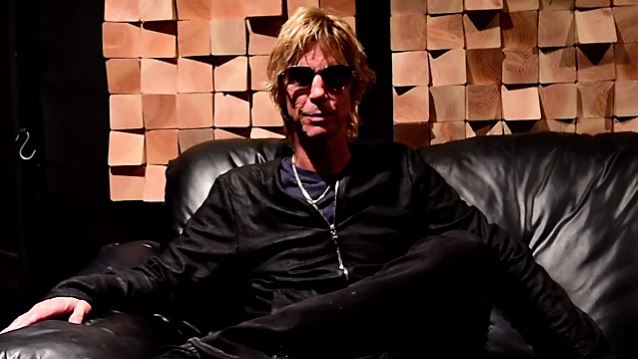 Former GUNS N' ROSES bassist Duff McKagan was interviewed on a recent edition of "Hunter And Michaels", the morning show on North Central Florida's classic rock station WIND-FM. You can now listen to the chat below.

Asked about the possibility of a reunion of GUNS N' ROSES' classic lineup, Duff said: "It could happen. I mean, this thing could happen, and it could not. And I think it would be wonderful, one day, if we reconciled, first and foremost. That alone would be cool."

Pressed on why he thinks the classic GN'R lineup fell apart, Duff said: "I think every band is different, for sure. I can't really… With our band, it was a lot of things. We just got really big… Once we started getting big, we got really big really fast. And there's no 'how-to' instructional manual for that thing, what happens to your life. We'd just fall into every kind of stupid typical thing that we thought we'd never fall into."

McKagan played with GUNS N' ROSES at last year's concerts to fill in for bassist Tommy Stinson, who was committed to two reunion shows at the Coachella festival with THE REPLACEMENTS.

McKagan joined GUNS 'N ROSES onstage for the first time in 17 years at an October 2010 concert in London. He also performed with the current version of GUNS in December 2011 at shows in Vancouver and Seattle. All three appearances were for a few songs, not full gigs.

Last year's South American shows marked the first time Duff has played full concerts with the band since his departure in 1994.

McKagan's second book, "How To Be A Man (And Other Illusions)", came out on May 12 and is the follow-up to his critically acclaimed New York Times best selling memoir, "It's So Easy (And Other Lies)".

The bassist released a three-song EP, also called "How To Be A Man". in conjunction with the book's publication. The title track featured former GUNS guitarist Izzy Stradlin and ALICE IN CHAINS axeman Jerry Cantrell.