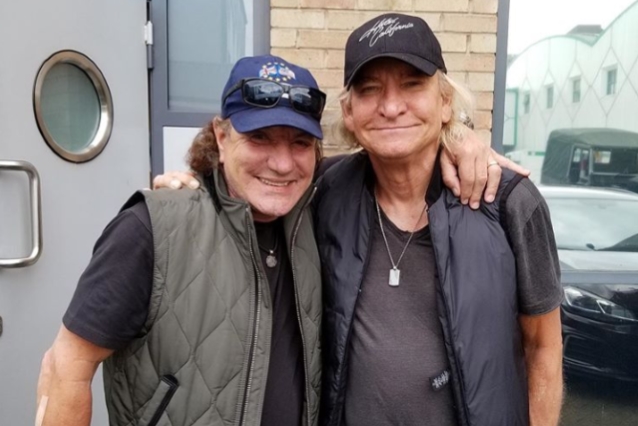 EAGLES guitarist Joe Walsh has clarified that he is not working on an album with AC/DC singer Brian Johnson.

One day after the EAGLES' sold-out June 23 show at London, England's Wembley Stadium, Joe took to his Instagram to post a photo of him with Johnson, writing in an accompanying caption: "Great day making music with my old pal Brian today in London. We nailed it! Love ya man!"

Walsh's post led to speculation that that the rock legends were recording the impromptu song they created when Joe appeared in an episode of Brian's TV series "A Life On The Road" earlier this year. The show saw Johnson and Walsh riding a limo around some of Los Angeles's most important music spots and Joe reflecting on his early days in the JAMES GANG and subsequent career with the EAGLES.

Earlier today, Walsh took to his Twitter to write: "To set the record straight – 'THERE IS NO RECORD IN THE WORKS BETWEEN BRIAN AND I' We were simply having a bit of fun together, we are musicians afterall!"

The news of Johnson's latest musical activity came less than a year after he and AC/DC drummer Phil Rudd, along with guitarists Angus Young and Stevie Young, were photographed outside Vancouver's Warehouse Studios last August. Based on the pictures, the assumption is that AC/DC is in the midst of making — or at least planning — another album, with Rudd and Johnson both back in the lineup. Online reports have also indicated Angus Young will dedicate the new AC/DC album to his late brother.

Ever since AC/DC completed the tour cycle for its 2014 album "Rock Or Bust" three years ago — a turbulent trek that weathered the forced retirement and eventual death of co-founder Malcolm Young, plus the departures of Johnson, Rudd and bassist Cliff Williams — fans have wondered whether sole remaining founding member Angus Young would keep the band going or decide it was time for AC/DC to pack it in.

To set the record straight - "THERE IS NO RECORD IN THE WORKS BETWEEN BRIAN AND I" We were simply having a bit of fun together, we are musicians afterall! pic.twitter.com/pHk8b6xqvS