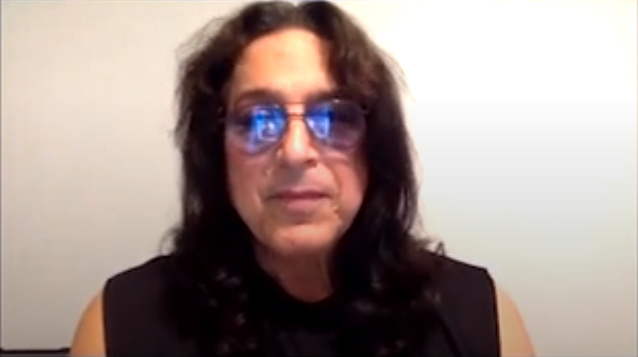 During a recent interview with Talking Metal, Eddie Ojeda was asked if thinks TWISTED SISTER will ever play live again, four years after the band completed its farewell tour. The guitarist responded: "I never say never, because you never know. It depends on the situation. You always miss it, no matter how much you've done it.

"The whole comeback — we were back together for 14 years, and we did a lot of shows in the last 14 years, and we were headlining all the shows," he continued. "We were bigger now than we were in the '80s. So it was a great time.

"I think it just got to the point where we just felt — maybe it was like [the American sitcom] 'Seinfeld': go out on a high note. But as far as that goes, THE WHO blows everybody away — they are the biggest liars of all time. [They played their farewell tour in 1983] and they [are] still touring. Forty tours later, and they're still saying, 'We mean it this time.' So if anybody's gonna complain, they'd better talk to THE WHO first."

Three months ago, TWISTED SISTER singer Dee Snider told SiriusXM's "Trunk Nation" that he had "no plans" to perform with the band again. "I've heard people [talk about it], and I just shrug my shoulders. The idea of being a hundred on that stage terrifies me.

"I created a persona and a performance level for myself that I painted myself into a corner," he continued. "And there's a standard that people expect and that I expect of myself. And honestly, I'm afraid of hurting myself because my ego is too big to not thrash about.

"I've got no plans on the horizon," Dee reiterated. "And just the idea of a bunch of lumbering old dudes on a stage... I'm not impressed with a lot of the reunions. I won't name names, but one that's out there has been performing for way too long in their reunion, and they stand there at their microphones with virtually no movement at all. I was stunned to see a band that used to be all over the stage just standing there frozen in place… For my money, that's not the memory I want people to have of me and TWISTED SISTER.

"So, I have no plans. People say, 'Never say never.' But there's nothing on the horizon."

In 2016, TWISTED SISTER embarked on one final trek, titled "Forty And Fuck It", in celebration of its 40th anniversary. These shows featured the band's "core lineup" of Snider, guitarist Jay Jay French, Ojeda and bassist Mark Mendoza, along with drummer Mike Portnoy. The band's last-ever concert took place in November of that year — 20 months after the passing of TWISTED's longtime drummer A.J. Pero.

A year ago, French said that he was that "blissfully retired" from playing music. "I walked off stage at the last show in Mexico, and I gave all my guitars away to my crew," he told the "Neil Jones Rock Show". "I said, 'Guys, thank you. It's been great. See you later.' I never looked back. We didn't even meet in the lobby and have a drink. I was off stage in a golf cart with my wife on the way to the hotel. I was on a plane and out of here."

French said that he played nine thousand shows with TWISTED SISTER and he "loved every bit of it." But he understood when people told him that they don't believe the band is completely retired.

"I never said we weren't coming back," he explained. "We retired for a while. And I said, 'No, I'm not gonna say never.' We could. Maybe there's a charity [event that we could play at]. Maybe there's Rock And Roll Hall Of Fame. I doubt it, but maybe. Whatever. It could happen. But at this point in my life, I don't think about it."