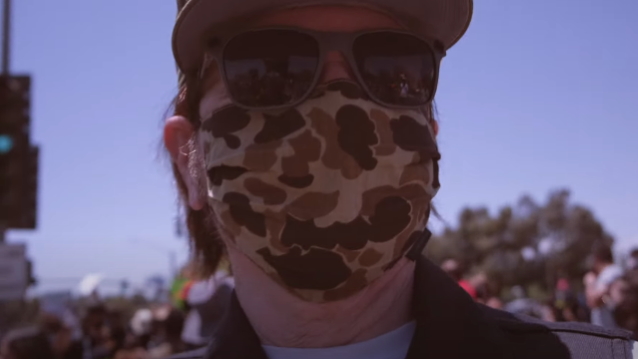 POISON drummer Rikki Rockett attended the June 4 protest in Santa Clarita, California over the death of Minnesota man George Floyd at the hands of police. His 10-minute video report on the experience can be seen below.

Several hundred protesters gathered for what was described as a peaceful afternoon demonstration, with some demonstrators holding signs in support of the "Black Lives Matter" movement. One sign read, "Racism is a sin — white supremacy is a scourge on the nation", while another read, "We hold these truths to be self-evident that Black Lives Matter."

Rikki wrote, in part: "Some of the hatred is so deeply rooted that when someone tries to make sense of it, it simply will not make sense on an intellectual level. I mean this on both sides. Black people are so hurt by so many years of oppression that it is just explosive at this point. Conversely, it's easy for white folks like me, who have been brow beaten for racism that we never felt, to be fed up. The danger is in becoming racist yourself by allowing that emotion to take hold and allowing a narrative that supports that to take hold."

Cities across the country are bracing for another weekend filled with protests over Floyd's death and the broader treatment of African Americans at the hands of police.

Tens of thousands turned out in Australia, Britain, France and Germany and other nations in support of U.S. protests, while denouncing racism in their own countries.

What the hell do I know about protests and inequality?

Well, back in the day, I was an EMT in the city of Harrisburg,...