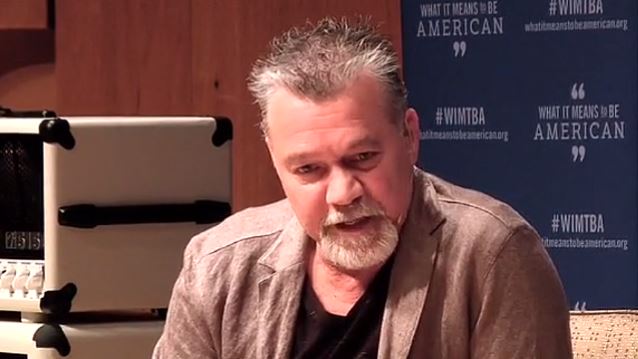 According to The Pulse Of Radio, guitarist Eddie Van Halen spoke about the status of VAN HALEN during a visit last week (Thursday, February 12) to the Smithsonian National Museum of American History in Washington D.C.

When Rolling Stone asked the rocker about current plans for the band, he said, "I'd love to make a studio record. Depends on everybody's timing. I don’t know what Dave Lee Roth is up to now. I don't know if he’s living in New York or Japan or wherever he is."

And when asked what it's like been like to adjust to three different vocalists over the years — David Lee Roth, Sammy Hagar and Gary Cherone — the guitarist said it's more about the vocalists adjusting to the band. He said laughing, "You sing this, or you're out of the group."

Van Halen was on hand at the museum as part of its "What It Means to be American" series, a program to explore and celebrate the American experience.

The band has been keeping a low-profile ever since abruptly canceling its 2012 tour with Roth.

VAN HALEN is expected to release a live album on March 31 called "Tokyo Dome Live In Concert". Recorded on June 21, 2013 at the Tokyo Dome in Japan, the set features 23 tracks taken from all seven albums the band recorded with Roth as frontman. It will also include tracks from the group’s 2012 reunion effort, "A Different Kind Of Truth".