A memorial honoring legendary VAN HALEN guitarist Eddie Van Halen will be considered on Monday (October 26) by the City Council in Pasadena, California, where the band was formed nearly five decades ago.

Following Eddie's October 6 death after a long battle with cancer, fans left flowers at his childhood home on Las Lunas Street in Pasadena. Additional flowers, candles and fan mementos were placed on Allen Avenue where Eddie and his brother Alex scratched their band's name into the wet cement of a sidewalk when they were teenagers.

"On October 6, 2020, the legendary guitarist Eddie Van Halen succumbed to his battle with throat cancer. Van Halen was the co-founder and main songwriter of the award-winning band, VAN HALEN, a rock group that got its start in Pasadena in the 1970s. Since his passing, Pasadena has received several requests and suggestions from the community to do or name something in Van Halen's honor to recognize both his local connection to Pasadena, as well as the impact that his artistry had on music.

"The Van Halen family emigrated from the Netherlands to Pasadena in 1962 and settled in a house on Las Lunas Street. The two Van Halen children, Eddie and Alex, attended Hamilton Elementary School where they performed for the first time in a student band called THE BROKEN COMBS. By the early 1970s, the Van Halen boys attended Pasadena City College where, in a scoring and arranging class, they met future VAN HALEN frontman David Lee Roth. Together, with Arcadia resident Michael Anthony, they formed the group VAN HALEN and began playing local venues from backyard parties to the Civic Auditorium. By 1977, the rock group VAN HALEN had secured its first recording contract and over the next 10 years churned out several multi-platinum albums. By the 1980s, VAN HALEN was regarded as one of the best-selling rock artists of all time with Eddie Van Halen, in particular, credited with reinventing heavy metal and fusing it with pop for a new rock and roll sound. In 2007, VAN HALEN was inducted into the Rock And Roll Hall Of Fame.

"Given the band's connection to Pasadena and the hometown pride expressed by its residents, several requests have been made to name a street, alley or other monument in his honor. A strip of curb on North Allen near the Van Halen home on Las Lunas street has served as a make-shift memorial site since his passing, helping to prompt a broader discussion of a local memorial. Over the past week, staff has contemplated other potential sites for a memorial such as renaming of a street or alleyway or the placement of a public monument in an area associated with the late musician.

"Renaming of a Street or Alleyway

"An early suggestion received by staff was the renaming of the alley near the Van Halen home. Although the idea is reasonable, the street renaming process is not conducive to a predominately residential area should it become a destination for fans and visitors. Another potential alleyway location is Electric Drive which abuts the back side of the Raymond Theater at Raymond Avenue and Holly Street. The Raymond Theater was once owned by David Lee Roth's father and was a location for VAN HALEN rehearsals. Electric Drive was named by ordinance in 1907 for the Pacific Electric Railway Company, a privately owned mass transit system. Pacific Alley intersects Electric Drive to the north forming an L-shaped alleyway segment. Should the Council choose to proceed with renaming a street or alley in honor of Eddie Van Halen, the process for doing so would be governed by the California State Vehicle Code. Public noticing requirements for such an action would include notifications to the post office, fire, police, all abutting property owners and all properties within a 300-foot radius of the street or alley segment. At a future Council meeting, a public hearing would be needed along with an adopted resolution through approval votes. The adopted resolution would need to be recorded with Los Angeles County and new street signs and plaques installed by the City.

"The placement of a public monument is another option for recognizing the late musician. Public monuments include memorial plaques, works of art, or other fixtures intended to commemorate and individual or group. In this instance, a number of options exist including placing a plaque at the Van Halen family home on Las Lunas, on the campus of Pasadena City College, or Hamilton Park in East Pasadena (where the young Van Halens performed).

"A preferred location for such a monument might be at the Pasadena Convention Center and Civic Auditorium, a location where the band played several of its earliest performances. Coincidentally, the Pasadena Center Operating Company (PCOC) has been approached by an individual interested in hosting a virtual benefit concert with proceeds raised funding the construction of a statue or monument in the musician's honor. The PCOC staff is also open to placing a plaque or statue, or renaming a walkway in between the Civic Auditorium and Exhibit Hall, so that there is a public place for people to visit to celebrate the life and legacy of Van Halen.

"As per the Monument Policy, the placement of public monuments is under the administrative jurisdiction of the City Manager. The first step in the process is a determination as to whether the proposed monument has city-wide, or less than city-wide significance. One of the considerations for a city-wide monument is whether or not the project would have ongoing maintenance costs and whether they would create additional liability or safety issues. All monuments, regardless of whether they have city-wide significance or not, must meet criteria for appropriateness, compatibility with the surrounding environment, impacts on existing use, etc. Finally, monuments must be undertaken with valid plans and permits approved by the City of Pasadena, regardless of whether they are funded by private individuals or groups. Ownership of monuments must be transferred to the City upon the written acceptance of installation by the City.

"Should the City wish to use public art funds to construct a memorial then the process would need to follow the Capital Program Public Art Policy & Guidelines. This process if overseen by the Arts & Culture Commission and requires final approval by the City Council. The City Council may decide, in its sole discretion, to accept or reject a proposal for a monument, to determine the appropriate location for a proposed monument, or take whatever action(s) it deems appropriate.

"Both Eddie and Alex Van Halen lived in Pasadena, have strong connections to Pasadena having lived in the city, attended its public schools, delivered newspapers for the Pasadena Star News and entertained local residents both during backyard parties and later on stage and through the radio. Recognizing VAN HALEN the band and/or individual members should be considered.

"With his passing, Eddie Van Halen's international recognition as a musical artist is noted for the significant impact he had on the rock and roll genre and his legacy is a source of hometown pride for the city.

"Costs related to the design, construction and installation of a physical memorial will depend on the scope and complexity of the project. Based on Council's direction staff will further evaluate any public dollars that might coincide with privately raised funds." 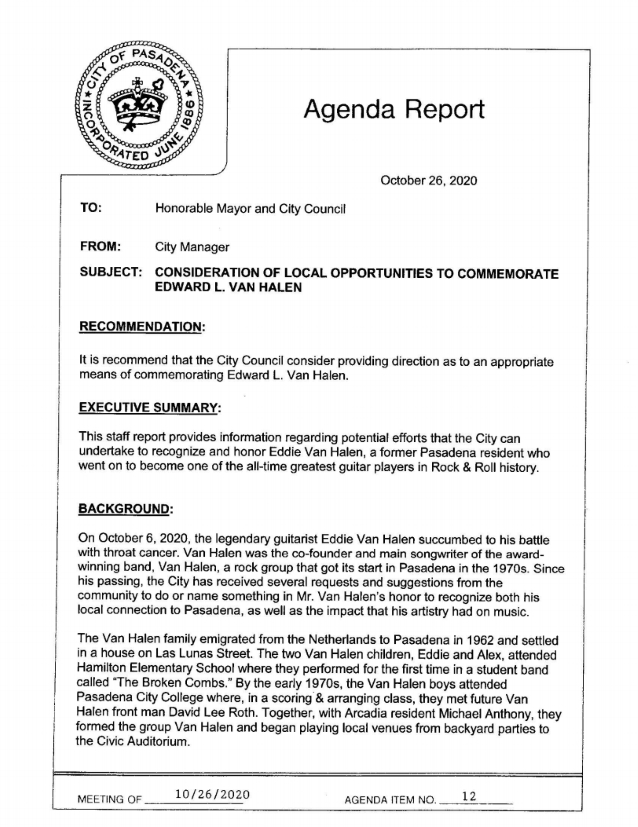 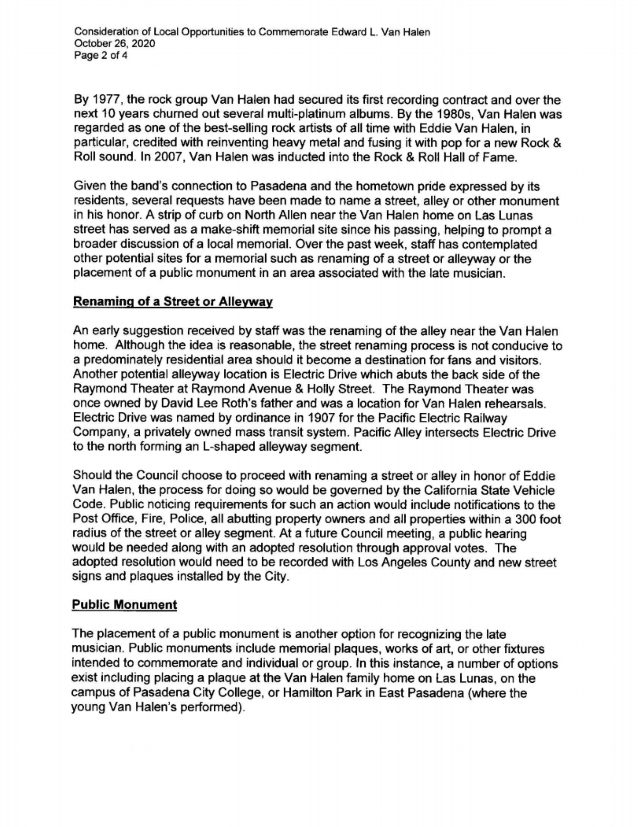 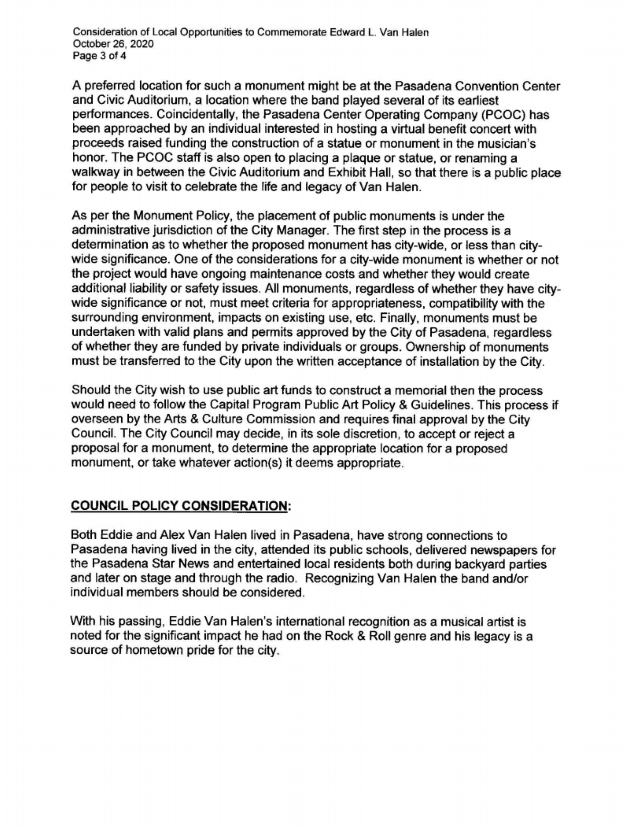 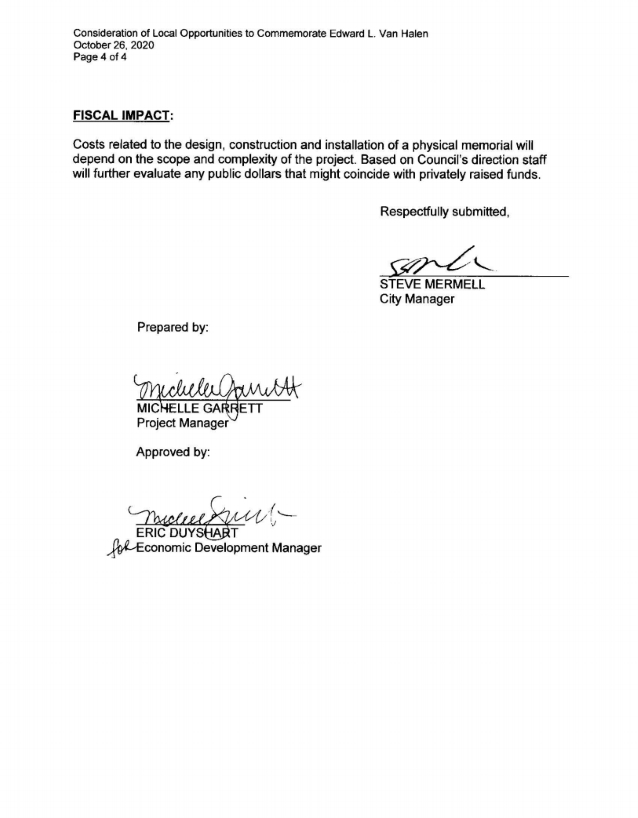