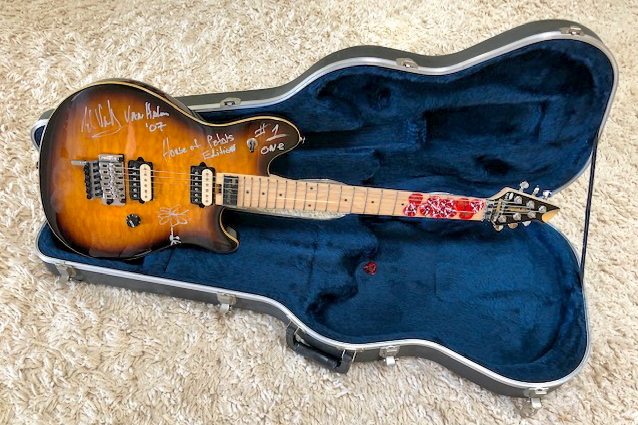 A Peavey Wolfgang electric guitar once played by Eddie Van Halen is being auctioned.

The instrument was reportedly used by Eddie at an event in Bel Air, California.

According to a post on EddieVanHalenGuitars.com, Eddie signed and gifted the 2006/07 Peavey EVH Wolfgang Special guitar to House Of Petals owner Joey House.

As part of the online sealed-bid auction, the highest bidder will also receive a matching signed case and one of Eddie's guitar picks.

For more information, go to EddieVanHalenGuitars.com.

Last December, Eddie Van Halen's son Wolfgangcriticized an auction of three of his late father's guitars. The instruments were sold for a total of $422,050 through Julien's Auctions as part of a larger music memorabilia event called "Icons & Idols".

The 30-year-old said the sellers were "taking advantage of my father's passing", and he had "nothing to do with" the sale.

"I don't EVER plan on selling any of my father's iconic guitars," he said.

According to BBC News, Julien's Auctions said two of the guitars were submitted for sale weeks before Eddie died.

Wolfgang added that one of the guitars sold had been a gift, writing on Twitter: "It WASN'T for charity. They're just taking advantage of my father's passing. What a surprise."

He also suggested the only place they could "possibly belong in is a museum."

Julien's Auctions said the instruments in the sale were a custom-designed 2004 "stage-played" guitar, a "customized and played" guitar and a "music video guitar" that was used for VAN HALEN's classic 1984 single "Hot For Teacher". The latter was a non-playing prop that was used by a child actor who played a young Eddie Van Halen in the song's accompanying video.