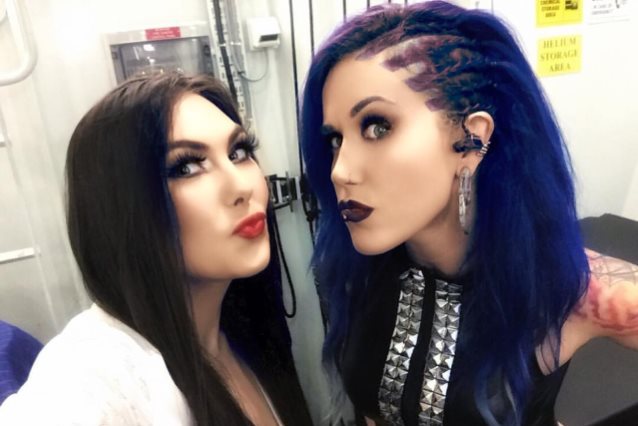 Kyle McGinn of Dead Rhetoric conducted an interview with vocalist Elize Ryd of Swedish melodic metallers AMARANTHE prior to the band's March 8 show at Webster Hall in New York, New York. A few excerpts from the chat follow below.

Dead Rhetoric: Obviously the big question concerns Jake's [Joacim "Jake E" Lundberg, vocals] official departure from the band. It seems like it was something you may have seen coming for a while…

Elize: "It was a slow process rather than something very shocking. It's probably what you noticed — everyone noticed… he was cancelling tours. He decided to stay home and work on other things — he wanted to focus on a movie career, and some other things he felt that he had to do. We've been doing this band for a very long time and I feel the same way. We are getting older – the older you get, the more you feel stressed about things like, 'Well I wanted to do this and that… how will I have time for everything?' The band takes up so much time. There's things you want to achieve! He had kids so he had probably 50 percent of the time I have, as someone who does not have kids. That's why I haven't had kids yet. I know there are things that I want to do still, like a musical for example. It's just a small thing, but that would be lovely. I would love to put out a solo record, but that would also take time. I need to do those things before I have kids — because then I know I will not have time. For him, he had a child and he has only so much time [to spend with his family] so he has to be careful in how he spends it. It's his life, it's not our life or someone else's life — it's his life and this is what he decided to do. We can't do anything else but continue. We have a big audience and the rest of us don't want to stop because of that."

Dead Rhetoric: I know that it's fresh that he has permanently exited the band, but do you have any idea about the long-term plan in finding a replacement? Chris [Adam Hedman Sörbye] has played a big part in filling in so far.

Elize: "Chris has played a big part, and we asked him if he was interested in joining. He actually said no, because he wants to focus on SMASH INTO PIECES. That's the thing that people don't understand — maybe we could offer him better pay, maybe…but it's not about money. When you are in a band, sometimes you earn and sometimes you don't. You can't make your decisions based on the business, you have to do it from the heart. Otherwise you burn out. You can't do this if you don't love what you do. So I really respect that he wanted to stick to his own band, because I would want to do the same. I want to do my thing, and I'll do that no matter what it takes. If I was hired by someone else, I would not enjoy it as much. So all due respect to him, and we are now looking for someone who might fit. Vocally, it's very important because it has to suit my voice. It's hard to find good clean vocalists. It's hard to find good clean vocalists who actually like metal. [Laughs] I know a lot of guys from my background in the musical scene, and they can pull off anything. Even people who played in the QUEEN musical 'We Will Rock You'. People who can sing rock, but know that they aren't frontmen. They can act, but it's not real to them. It's actually a very rare [combination] to find. For Sweden and Finland, where we are based out of, it's a little bit easier because we have colleagues we can ask [to fill in]. We already have a plan for the upcoming shows and tours over there. But when it comes to visiting the States for bigger tours, it would make sense for us to have found someone permanent. It would also make us more relaxed. I'm a little bit stressed, to be honest. I was stressed when I didn't know what was going on [with Jake E] and now that I know…"

Elize: "Yeah — who is going to be my partner? I want to be able to share this career with someone really nice. You never know with people — are they going to change, personality-wise, after a year? Things like that make you a little bit nervous. I know musicians can always make their show, but for me, I'm singing together with someone — it's very intimate position. I'm probably going to be the most picky one about this situation."

Dead Rhetoric: That would be totally understandable, because really, it does have to work with you…

Elize: "Maybe some other people in the band may think, his voice… or hers? Are we going to have a female? [Laughs] That would be cool. Actually I wanted Alissa [White-Gluz] to join the band. I was drop-dead serious about that. But then she got the ARCH ENEMY gig. She's very happy with her life and career, as it is now. She doesn't need to share her voice with two other people, like I have to and Henrik [Englund Wilhemsson] has to. Anyways… it's going to be very interesting to see if we can find a match. You can go through YouTube… you can search every corner. I know Thomas Youngblood [KAMELOT] is very good at that, and NIGHTWISH is very good at finding new replacements. It's so weird that we are in that position now. I didn't really expect it — but, on the other hand, maybe I'm just blind? Maybe I just didn't see… people are growing up, they are having kids, and they are choosing other things. It's not only the band [for them]. For me, it's been the focus, with some side projects of course. It's very weird how age changes your view on things. If you want to survive in this business…that's one of the reasons people stay young. If you grow up then you just don't feel like you fit in any more. I have been thinking about this — why is everyone always so young? It seems like musicians don't grow up. At least they don't allow themselves to get old, which I think is a good thing. I always thought it was nice to allow yourself to live your life and stay young forever [through music]. A lot of fans who are older say they feel like they are 25, because the music…metal, makes them feel young."