Norwegian black metal legends EMPEROR will release "Live Inferno", a special live series features various releases recorded/filmed during the band's sold-out 2005-2007 reunion performances, on April 16 (in Europe) via Candlelight Records. Several formats will be available, including a two-CD/slipcase with a 16-page booklet, a limited-edition box featuring two CDs and DVD with an enhanced 24-page booklet, a single DVD, and two limited-edition double-vinyl gatefold sets. The audio portion of the "Live Inferno" series features exclusive recordings from the band's headlining performances at Norway's Inferno festival and Germany's Wacken Open Air festival. Each recording will be pressed as individual double-vinyl sets; the first pressing limited to 1,000 copies on black vinyl with any additional pressings in varied colors selected by the band. A special gold-vinyl seven-inch limited to 2,000 copies titled "Thus Spake the Nightspirit" (featuring a live rendition of the band's famed song from the album "Anthems to the Welkin at Dusk" with a live recording of "Inno A Satana" from the band's popular "In the Nightside Eclipse" album on the b-side) will be pressed and released via the label's official webstore beginning February 16. The video portion, titled "Live at Wacken Open Air 2006 - A Night Of Emperial Wrath", has a running time of 70 minutes and includes footage professionally filmed at the Wacken Open Air festival with additional on-stage and exclusive backstage footage filmed and compiled by the band.

"It looks like these releases will be the final nail in the coffin for EMPEROR," says guitarist Samoth. "They are a testimony of the live reunion that took EMPEROR to even new heights; unique events like Wacken where EMPEROR headlined in front of 60,000 people. We had a great run of shows and feel lucky that we were able to come back even bigger and perform songs from our complete catalogue for a lot of dedicated fans old and new. There will be several cool formats and limited editions coming that should be a nice treat for the fans and a worthy representation of the EMPEROR legacy. EMPEROR is dead, long live the EMPEROR!" 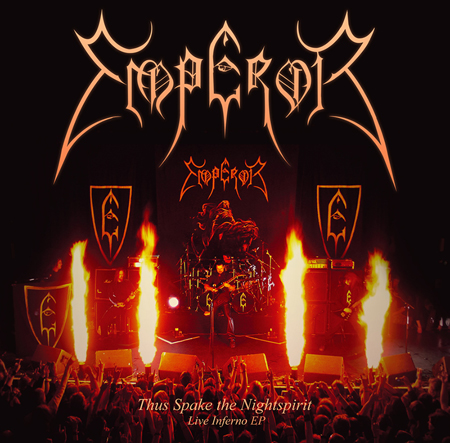