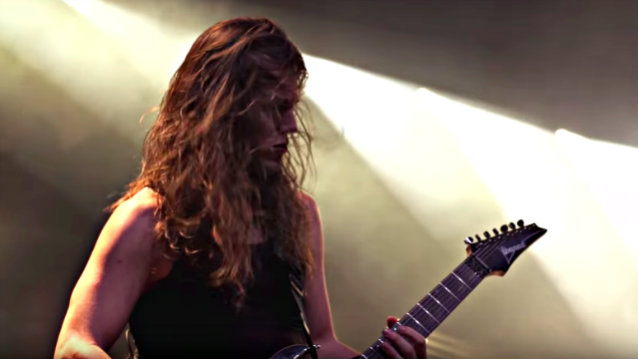 EPICA Guitarist On Group's Wide-Ranging Influences: 'Name It, And We Have Used It In Our Music'

Mark Jansen of the Dutch symphonic metal band EPICA was interviewed by ArmyOfOneTV prior to the September 29 finale of the group's "The Ultimate Principle" tour at New York City's PlayStation Theater. The full chat (recorded by Ignacio Orellana of ProMusicVideo.com) can be streamed below. A few excerpts follow (transcribed by BLABBERMOUTH.NET):

On the origins of the group's musical style:

Mark: "When I was in AFTER FOREVER, we developed kind of the style that we're also playing with EPICA. I always liked film music and classical music, and also metal, so I thought, 'This would be a great combination. At that time, when AFTER FOREVER started doing that, there was not many bands yet playing this style of music. You had THE GATHERING and ORPHANAGE, and it was a little bit into that direction — and then when I was out of AFTER FOREVER, I continued with EPICA, and keep developing this style up to today. I think when you compare our first album to our last album, still you hear a big evolution.

"It's a lot of work to write songs, because there's a lot going on, a lot of layers. You have the guitar layers, obviously, bass, drums, vocals, but also all these orchestra layers, with several instruments. When you peel all these layers, you will find brass, woodwinds, ethnic instruments, percussion, violins of course, string section. Name it, and we have used it in our music. So it is a lot of stuff going on, a lot of things to work on when you write a song, but that's the big challenge of it."

On the group's new EP, "The Solace System":

Mark: "It contains six tracks which are tracks we wrote for 'The Holographic Principle' album. At that time, we recorded eighteen tracks, and we wrote them all to be album tracks. We had eighteen equal tracks, quality-wise, and we just made a selection for 'The Holographic Principle' which tracks that did fit best together. So, there were still six tracks left, and we didn't want them to end up, like, bonus tracks on, for example, a Japanese edition that just a few people can get to hear. We decided to keep them together and release them as an EP, because I think in this way, it does justice to the amount of work we put into these tracks. Also, the fans now, they seem to be very happy with this EP. It's also to have something new out during our world tour that we're currently doing. All in all, it was the perfect solution for these six tracks."

"The Solace System" was released on September 1 via Nuclear Blast. The effort was recorded, mixed and mastered by Joost van den Broek and Jacob Hansen.