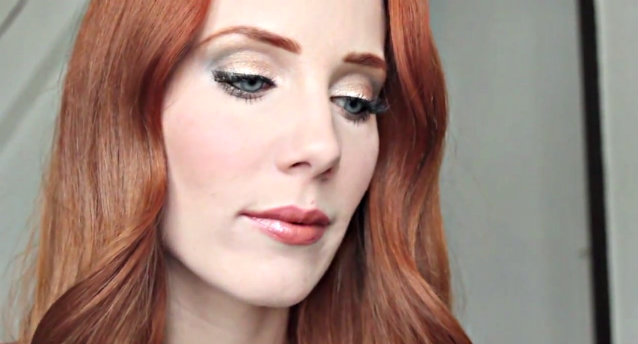 Gothic Beauty — the Portland-based quarterly magazine that covers fashion, beauty, lifestyle, and events for the goth scene — recently spoke to lead vocalist Simone Simons of Dutch symphonic metal band EPICA. A couple of excerpts from the chat follow below.

Gothic Beauty: In the themes that EPICA tends to deal with, I've noticed that religion is a recurring subject. With some of your writing being about Islam, I was wondering if people initially perceived your interest in religion as a band as specifically anti-Islamic and if that's caused any blowback for you, even though from my perspective it seems more like your focus is on religion as a whole rather than on any specific religion.

Simone: You're totally right. We got that question yesterday during our chat with fans. There was a person asking, "What do you have against Islam?" and another fan who already knows us jumped in and pointed out that it's not Islam specifically, it's fundamentalism in any religion, the dangerous part of religion. I personally think religion can be great — it can give you hope and strength, make you part of a community — but then there are the extreme parts, the suicide attacks, the suppression of women. They always say one of the commandments is to respect and love each other, but then why can't gays marry? It's not equal.

Gothic Beauty: Looking at the last album, it could seem like rather a bleak perspective on the current state of the world, which is interesting in the context of you just having had your first child, and Coen [Janssen, keyboards] also just having had a child. It's an interesting juxtaposition, an album that could be interpreted as having a sort of "the world is going to hell in a handbasket" feeling, while at the same time you have these two new lives.

Simone: The message of the album is meant to be more that a higher level of consciousness is coming, and the people who're currently indifferent to the problems of the world will become more involved. I don't believe in the end of the world, but I do believe in a higher form of consciousness. I always loved children and always wanted to have them. Some people say, "I don't want to bring a child into this world, it's too cruel," but you can also have babies and turn them into wonderful human beings who maybe can make the change.

Gothic Beauty: You could take the perspective that if the people who want to make a change don't have children then they're not going to have much influence on what's going to happen fifty years from now, so in a way, that's exactly the people who you do want to be raising children.

Simone: A lot of people nowadays choose to put education or career first and then have children later. I chose to do it in the middle — not too young, not too old. I'm going to raise him into a fine gentleman, aware of the people around him, showing respect and contributing to society, and hope that he's going to make a change in the world. We, as a band, also think about what we write carefully because it can reach a large number of people. We don't write about the birds and the bees, each song does carry a message, and we're also very involved with charity. We try to set the right example.