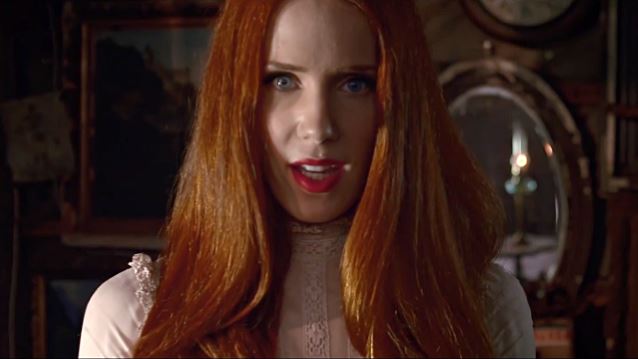 "Victims Of Contingency", the new video from Dutch symphonic metallers EPICA, can be seen below. The clip was directed by Remko Tielemans (TEXTURES) and was produced by the Kunstoff Kollectiv, the same team who were responsible for the band's music video for "Storm The Sorrow".

Comments EPICA guitarist Mark Jansen: “We've picked a heavy and brutal track this time as we wanted to surprise everybody. As 'Victims Of Contingency' is also a fan favorite, we are convinced that it is the right choice.

"The video for 'Storm The Sorrow' has been received very well by the fans, so we were very happy to work with Remko and his team again.

"We think the end result for 'Victims Of Contingency' is astonishing and I am very excited that we can finally share this video with all of you!"

"Victims Of Contingency" is taken from EPICA's sixth studio album, "The Quantum Enigma", which sold around 3,700 copies in the United States in its first week of release to debut at position No. 110 on The Billboard 200 chart.

In a recent interview with Aux Portes Du Metal, Jansen stated about the lyrical themes covered on "The Quantum Enigma": "'The Quantum Enigma' means that in quantum physics we can't observe little particles without influencing them. It's been proven in a very famous experiment called the dual slit experiment. As we are all made out of an infinite amount of particles, what does all of this mean for the world as we know it? Is the world still there when we're not watching? Or is it a holographic projection coming from ourselves in a way? What is real and what is an illusion? The 'solid' matter as we know it isn't that solid after all. It's all energy which is spinning and turning in a way that it gives us the illusion of being solid.

"'The Quantum Enigma' is pointing out such questions which are dealing about, thoughts, dreams, illusions of the mind. 'The Second Stone' talks about Alzheimer; people who get this disease die mentally for a first time, then after a while they die physically for a second time. 'Victims Of Contingency' talks about taking responsibilities for your deeds, and the power to learn from mistakes in order to grow as a human being. 'Chemical Insomnia' talks about the sleeping pill culture that goes totally out of proportions these days."