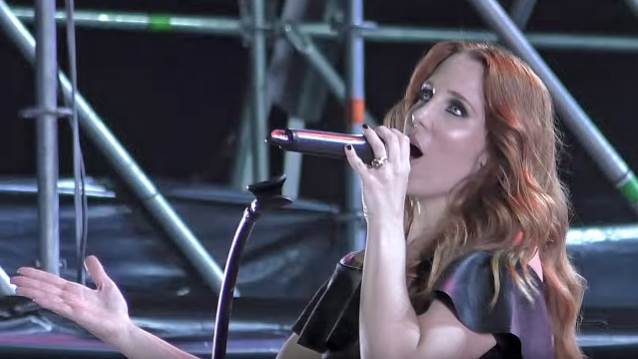 EPICA vocalist Simone Simons recently spoke with Metal Wani's Carl O'Rourke. The full conversation can be streamed below. A few excerpts follow (as transcribed by BLABBERMOUTH.NET):

On the band recently performing their 1,000th concert:

Simone: "It was kind of weird to think that we have played so many shows already, but also not a big surprise because we've been touring nonstop. We actually already had our 1000th show in October last year, but this was like a celebration of having played that many shows. That was not at the actual 1000th show for us to play, but we wanted to do it at the venue where it all started, 013 [in Tilburg, Holland], where we had our very first show supporting ANATHEMA. We were all so super nervous, and back then, we had no idea of where [we would go] in the far future. I was still in high school. I thought I might study and get my shit together, and then I ended up in a metal band, and that's my main profession. We're doing well; we can all support our families by doing what we love, playing in a metal band. We consider ourselves lucky, because not many musicians can do this."

On the group's upcoming book, "The Essence Of Epica":

Simone: "Last year, our manager asked us if we would be interested in doing a book like this. He brought a book from OPETH with him for us to have a look at in order to see if it's professional. I took the book home with me, because I'm also an OPETH fan — like, 'This book is mine.' We did a book back in the day when we were still a young band, which was kind of a clusterfuck, because we a show and recorded it to be a DVD, and then the record company went bankrupt and the DVD was never released. We will probably never release it because it doesn't represent the band nowadays anymore. We've gathered quite some cool, funny, some sad, some crazy stories over the past almost 16 years now, and all of us have stored different memories. It's cool to dig up those stories and put them in a book, because the fans love everything behind-the-scenes. Of course, we show quite some stuff on social media, but we definitely still have some treasures buried in boxes in the basement. We're going to go really in-depth about many things, and it's going to be honest — no political [sic] correct answers or sugarcoating anything. It's going to be very raw and real."

On the group's new manga-/anime-influenced "Epica Vs. Attack On Titan Songs" EP:

Simone: "We were given very basic English translations of the Japanese lyrics, and we had to rewrite it completely because it was a very direct, one-on-one translation, and it didn't fit the vocal lines anymore. The flow has to be correct – the emphasis on the right syllables. When you're writing lyrics, [they] need to be easily pronounced. Sometimes, you have these tongue twisters, so we kind of had to start from scratch. But we all knew the big lines of the story; we knew the theme of the song; and of course, from the translation, we could derive what was the gist of the story. Then we were given almost full freedom to rewrite the lyrics. We had to send them in for approval, the same with when we were finished arranging the songs. But everything was approved. We were lucky, because the composer from these songs, he is an EPICA fan. He was the one that wanted us to do the cover version, which was an honor for us. I could also name a couple of other bands that could have been really great options as well, but they chose us. We were up for a challenge, and getting a little bit out of the comfort zone. I enjoyed writing and recording the songs. Even though it does sound a lot like EPICA, it was still very different compared to EPICA, but we didn't put any less effort in it [than] we would do for a normal EPICA CD."

On how the group has avoided becoming stale:

Simone: "We have six people in the band, and we all write music and lyrics. It's different when you put everybody together to create something than if just one person would write it all. The arrival of three new band members over the course of ten years now means new composers. Therefore, we've been kind of reinventing ourselves, working with new producers. Of course, there's songs that I wish we didn't write, but we wrote them anyway. We wrote them to learn from them and to become better writers, and to learn from our mistakes and improve. That's something we strive for with each record — to improve wherever we can, and add new, little funny elements without betraying the typical EPICA sound. We're evolving as humans, as artists, as instrumentalists, as vocalists, as lyric writers."

On whether she feels the term "female-fronted" is empowering or restrictive:

Simone: "I would say the latter, because in the beginning, 15 years back, female-fronted metal would be the description of how the band would sound. It would automatically mean operatic vocals and kind of [a] symphonic touch to it. But now, there's so many amazing female singers in the metal genre, but they are not playing in a symphonic metal band. There are so many different styles of metal bands with a female singer, so just saying 'female-fronted metal' doesn't say anything about how the band sounds nowadays, so I think that term is outdated. I don't think it's disrespectful, but it's just saying that there's a female in the band. It's not saying what kind of style of metal a band is. I'm also not a big fan of namings, because EPICA has many different influences. The main influence is, of course, movie soundtracks, but it has some death metal, it has progressive metal. There's a lot of different styles woven into our music, but I don't feel like 'female-fronted metal' is trying to be diminishing [to] the band, or being anti-women or anything. I've always felt very comfortable in the male-dominated world. I prefer working with men, because men are very straightforward. Plus, I can totally win in the dirty jokes corner. I can stand my ground."

On when to expect a new full-length EPICA album of original material:

Simone: "The days don't have enough hours... I'm looking forward to gathering inspiration. I get a lot of inspiration from watching movies, and if I hear a cool line, I just write it down, and I wait until the guys have some music, and then I can start writing lyrics. We're all pretty — not burned out, but all really ready for a little break, and don't want to think too much about writing the next record. But we know that eventually, the creative juices start flowing. We want to come up with a great quality product, and we all think we've deserved a little break after working our asses off for so long."

"Attack On Titan" was made available outside of Japan on July 20 via Nuclear Blast Records. The EP recorded during the summer of 2017 at Sandlane Recording Facilities by Joost Van Den Broek. The original songs, which were influenced by the music of EPICA, were composed by Revo of popular Japanese band LINKED HORIZON.

The recently announced "The Essence Of Epica" book will tell the story of the remarkable musical journey of EPICA in the bandmembers' own words, and is illustrated throughout with rare, candid and classic photographs.