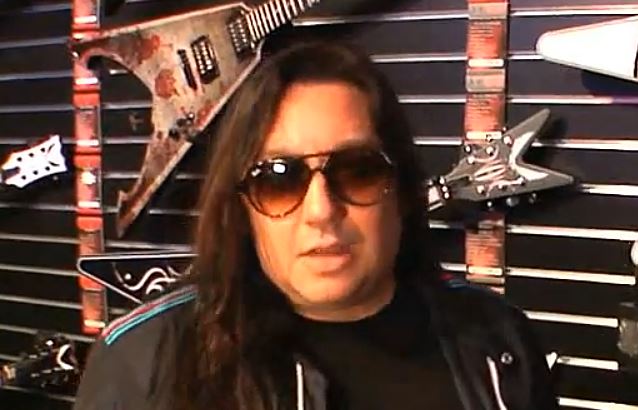 Speaking about TESTAMENT's plans to record the long-awaited follow-up to 2012's "Dark Roots Of Earth" album, Eric said: "Basically, we would be going in the studio if it wasn't for the fact that SLAYER asked us to do a tour. When we got the offer [to hit the road with SLAYER], we were, like, 'SLAYER…' And then it was, like… I'd seen CARCASS [was also supposed to be] on [the tour], and I'm, like, 'Oh my God! Maybe the record could wait a couple of more months.' I'm, like, 'That's killer.' But right after the SLAYER tour, we're getting in the studio and we're gonna be doing the new record."

Asked about the musical direction of the new TESTAMENT material, Eric said: "To me, they're… We used to have, like, maybe one or two thrash songs on the record. On this record, there's, like… Every song's thrash, or at least a thrash speed in 'em, so it's a lot more quicker and it's a lot more melodic. It's a lot more like MERCYFUL FATE kind of influences and stuff like that."

Regarding who will play drums on the new TESTAMENT album, Eric said: "Gene [Hoglan, drums] right now. Gene is definitely our first runner-up, and we'll see what happens. That sounds weird, and everybody is [probably going], 'What's going on?' Everything is all good. But you can't control fate, so… whatever."

As previously reported, TESTAMENT is planning to release a new single in time for the band's tour with SLAYER.