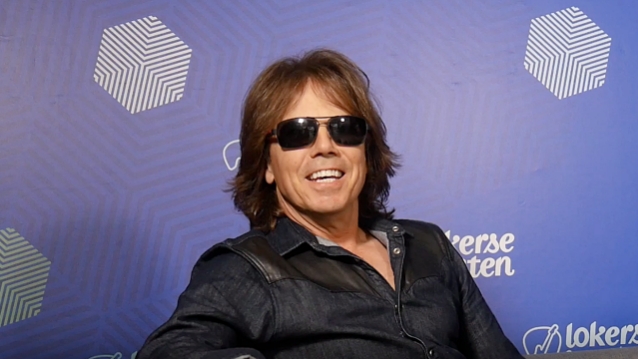 EUROPE's JOEY TEMPEST Likes Recording Albums Fast: All Important Decisions Are Made Within A Two-Week Period

EUROPE singer Joey Tempest recently spoke to France's Le Coin Metal about the band's songwriting process. He said (see video below): "We tour quite a lot, but we usually write an album — it takes about six months to get the material ready. Then we record it fast — we go into the studio and we record it in about two weeks. And all those decisions are important that happen in those two weeks. All five bandmembers and the producer are locked in [with] one goal: to make the greatest rock album you can. And I like that fast thinking — fast-moving things, just like they did in the '70s. And then we fix a few things and mix it. And then it's out. And then we don't look back. And then we go on the road. And we write together — all of us write together."

This past July, Tempest confirmed to Finland's Kaaos TV that he and his EUROPE bandmates have "started talking about" making the follow-up to 2017' "Walk The Earth" album. "Everybody is collecting ideas individually," he said. "And that's how we start. And sometimes we start something we call the 'Sunday club,' where every Sunday you contribute an idea, we e-mail an idea to each other. So we may do that again. It's kind of good, because it keeps you on your toes, it keeps you producing stuff at home. And then you get the ball rolling. And as soon as you get two or three great ideas going, then it starts rolling. And then you come into that six-month period before the recording, where we meet up and we rehearse together."

He continued: "We send a lot of ideas in different ways. We write in many different ways. Me and Mic [Michaeli] meet up sometimes, the keyboard player, and I play drums and sing and he plays keyboards, and we jam for two days straight. So we have 12 to 13 hours of material that I go back to London to sift through. And then I sift through all the jamming bits and I take that bit and that bit and that bit, send it back to Mic and say, 'What do you think of this?' And then we start. That's how a lot of great EUROPE tracks have come about — me and Mic just jamming and picking out the best bits."