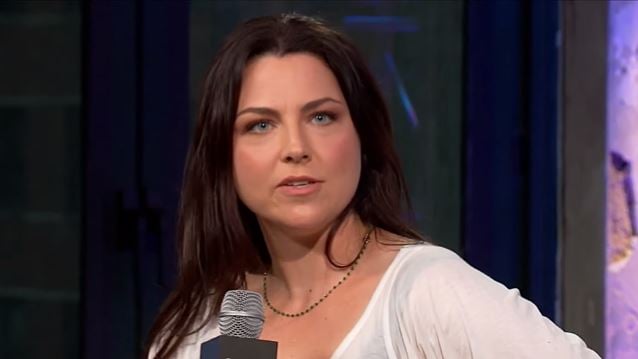 EVANESCENCE Is Working On Something 'Special And Different'

On September 30, EVANESCENCE lead singer Amy Lee talked about her latest project, a children's album titled "Dream Too Much", at AOL headquarters in New York City for BUILD Series. You can now watch the discussion below.

Speaking about the possibility of new music from EVANESCENCE, Amy said: "We have some new little plan in store, but I don't wanna give it away yet. But there is some new EVANESCENCE stuff that we're starting at, but it's not exactly the most traditional thing. It's not just, 'Okay, we're gonna make a new album right now.' Not that that's not coming, but first there's something else that's a little bit special and different and [that is] gonna take you down a different path that we wanna try. So, sorry that's so vague."

EVANESCENCE recently announced plans for a fall North American tour that will encompass 16 shows in October and November. The trek kicks off on October 28 in Dallas and will wind down on November 23 in Huntington, New York.

EVANESCENCE re-emerged last November after a three-year hiatus with shows in Nashville, Dallas and Los Angeles, followed by a few more dates earlier this year, but the new jaunt marks the band's first sustained tour since 2012.

Amy told AOL: "We're really having a good time as a band right now. Everybody's just gelling really well together and playing really well together. I probably always say that, [but] it's really, really true. And it's cool, because we're kind of revisiting some old things that we haven't done in a while and throwing some new things in there. I don't wanna give it all away."

"Dream Too Much" was released on September 30 exclusively with Amazon Music. The 12-track collection features contributions by several of Lee's family members, including backing vocals by her siblings, instrumentals by both her father and uncle, and an appearance by her two-year-old son Jack.

EVANESCENCE will release a very special career-spanning vinyl box set this fall encompassing all of the band's studio albums — "Fallen", "The Open Door" and "Evanescence" (with the latter two making their vinyl debut) — and, for the first time ever, the commercial debut for the previously unreleased demo album "Origin". Also included in "The Ultimate Collection" six-LP set is "The Lost Whispers" album, which officially culls the band's legendary bonus tracks and features the studio version of the long sought-after tour intro "Lost Whispers" and the first new EVANESCENCE studio recording in years, "Even In Death (2016)", a song that originally appeared on "Origin". The box set includes a 52-page casebound book featuring art, handwritten lyrics, photos and rarities.