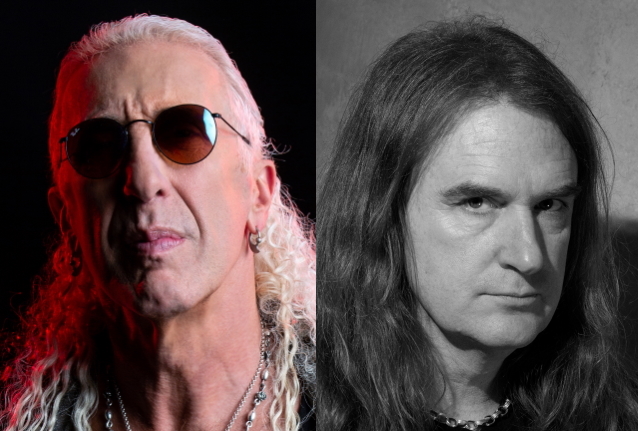 Dee Snider says that people need to realize that celebrities are flawed human beings who are capable of doing bad things. The TWISTED SISTER frontman told "The MetalSucks Podcast"in a new interview (as transcribed by BLABBERMOUTH.NET): "Creatives are damaged goods by definition. We choose to be actors, performers, writers, artists, painters, comedians, all those things, because we're damaged. And that's driven us to find these outlets. I don't know why people are so shocked when the evidence of that damage shows itself. When Dave [Ellefson] from MEGADETH gets caught masturbating [on video], well… First of all, you know a lot of you are doing the same thing. But second of all, he's a musician. He's not a priest. You can't expect him to be priest-like; hell, you can't expect a priest to be priest-like. But people are so shocked. And I don't get why the art is thrown away with the artist. If we found out that Michelangelo [the Italian sculptor, painter, architect and poet] was a pedophile, would we stop going to the Sistine Chapel [in Rome]. Would we paint it over? It's no longer good art because the painter turned out to be a pedophile? I'm saying it hypothetically."

He continued: "All arists and creatives have got some skeletons in their closets, and suddenly the skeleton is shown and we're, like, 'Well, he's not funny anymore.' 'He's not a good actor anymore.' 'Kevin Spacey, we can't watch his movies anymore.' He's one of the great actors of his time, but he's dead because he was… And I'm not saying he was right. But he's a damaged, broken person — he always was. It's what made him a great artist. I just don't get that we throw away the baby with the bathwater, as the saying goes.

"I'm not saying making excuses or whatever. I'm [just talking] about the art being dismissed, thrown out, devalued and disqualified because the artist turned out to be a fallible human being. And people should be very careful. Most of us live in glass houses.

"When I went to [testify before] the Senate back in the '80s [against the proposition to have warning labels be placed on albums deemed 'offensive' to listeners], they talked to me like I was the scum of the earth. Well, cut to all these years later, I'm still married and the Gores [Al and Tipper] are divorced. One of their kids was busted for possession. None of my kids have been busted. Maybe they just got lucky. But the fact of the matter is — judge not, lest ye be judged."

In 1985, the Parents' Music Resource Center (PMRC),led by Tipper Gore, was trying to introduce a parental warning system that would label all albums containing "offensive material." The system was to include letters identifying the type of objectionable content to be found in each album (e.g. O for occult themes, S for sex, D for drugs, V for violence, etc.),which resulted in the "Parental Advisory" sticker now found on new album releases with "questionable content." The incongruous trio of Snider, Frank Zappa and John Denver were called before Congress to testify in defense of music.

In 2015, Snider wrote an Op-Ed story for HuffingtonPost.com about his experience, saying: "Thirty years later, everything and nothing has changed. The ultra-conservatives still want to dictate to the masses what they deem acceptable for the general public to see and hear. The record industry is a mere shadow of its former self (apt punishment for its cowardice),and CDs and vinyl albums have almost become 'novelties’ in a world driven by downloads. Yet, the warning labels still adorn individual track listings and albums online.

"While initially my appearance at those Senate hearings was damaging to my career and reputation, long term it was beneficial, showing people for the first time that I was much more than a screaming 'Raggedy Ann on acid' and a fairly intelligent, sentient human being. Fortunately, I have gone on to better things."

Ellefson was dismissed from MEGADETH in late May, just days after sexually tinged messages and explicit video footage involving the bassist were posted on Twitter. The longtime MEGADETH member later released a statement on Instagram denying all social media chatter that he "groomed" an underage fan. He also filed a report with the police department in Scottsdale, Arizona alleging unlawful distribution of sexually explicit images of Ellefson by unknown offenders. In the report, Ellefson admitted that he had been exchanging sexual text messages with a Dutch teenager, who captured a video of several of their virtual "masturbating encounters" without his consent and shared them with friends. (According to Ellefson, the woman was 19 at the time of their first virtual sexual encounter.)