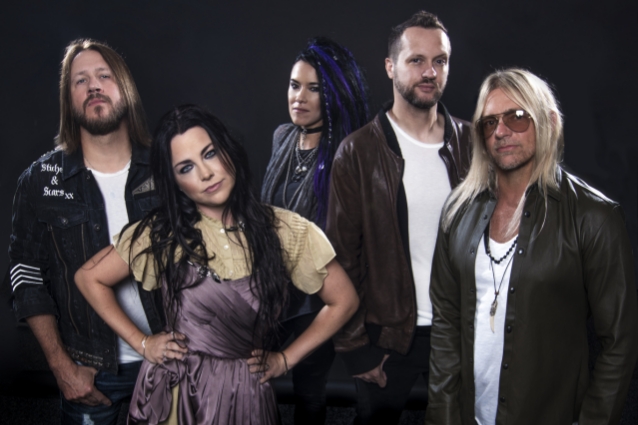 EVANESCENCE's AMY LEE On Next Album: 'We're Definitely In The Mood To Rock'

EVANESCENCE singer Amy Lee spoke to Billboard about the progress of the songwriting sessions for the long-awaited follow-up to the band's 2011 self-titled effort.

"We have a nice collection of songs, and a vibe and a theme is starting to develop, and I'm really excited about where it's headed," she said. "I don't want to give too much away because it has a long way to go, but we're definitely in the mood to rock. It's dark and heavy."

She added: "We've been enjoying kind of erring on the heavy side right now because we just came off of 'Synthesis'," referring to EVANESCENCE's 2017 album which contained some of the band's best-loved songs — as well as a couple of new ones — reinvented with full orchestra over a deep electronic landscape. "It feels like it's time to get in there and go for it."

Lee went on to say that EVANESCENCE's next album will be recorded over several sessions.

"We're going to get a few songs that we know we're ready to record that we love and go into the studio with a producer," she explained. "Then we're going to keep working and maybe try out a different producer on those couple songs."

Although Amy is considering not releasing all of the songs at once, she calls EVANESCENCE "an album band," meaning that "at the end of the project, there has to be a full album for us. I just feel like that's who we are," she said.