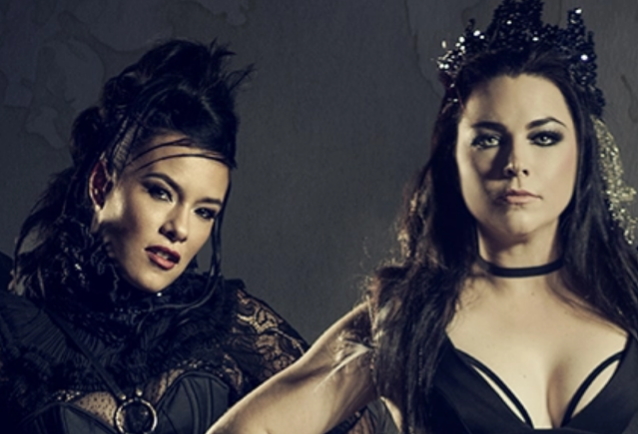 EVANESCENCE singer Amy Lee has opened up about the recent departure of guitarist Jen Majura, explaining that "sometimes you have to listen to the universe."

Majura's exit from EVANESCENCE was announced in late May, with the band saying in a statement that " we have decided it's time to go our separate ways."

Amy addressed EVANESCENCE's split with Jen in a new interview with Revolver magazine. Speaking about the band's new lineup, she said: "I am so happy, we are all so, so grateful. Emma Anzai is from the band SICK PUPPIES and we are old friends. We toured together in 2007 and she's just an excellent musician. We're all fans of her and just fits us on a personal level really well.

"We did a little European run in June and then we did a few shows here and had our first photo shoot with the new lineup just two weeks ago," she continued. "Some things are just meant to be. Something I'm getting better at as I get older is not trying to control everything so much. Sometimes you just sort of have to listen to the universe and what's going on and go, 'You know what? Okay, I need to live in the reality of what's happening now and make something great out of it instead of constantly trying to pull things the way I think they ought to go.'

"It's hard to explain what I'm saying without being specific. And we all love Jen; we had a great time with Jen. [I] don't want to make it like it's anything negative there. But sometimes that chapter just ends, and when you feel that and you know that as a band, that's how you keep things going. That's how you keep your team, your band, and everything healthy and moving the way it's supposed to move. It's complicated but at the same time you just need to follow your heart. At the end of the day, when you follow your heart and trust each other, you can move forward into a better place than you could've imagined for.

"This is big time new for us because I've had Tim on bass for 16 years and for the first time he is on guitar, which is fantastic," Lee added. "It's his original instrument, he's great on it, he gets into that position when we're in the writing room a lot. And Emma is just this amazing, seamless ... it's just amazingly cool and the other guys are just thrilled with it as well. We're all really happy right now, we're in a healthy new chapter moment. Those are always really energizing, so we've got a lot of energy and are feeling inspired and excited for the future."

In late June, Majura discussed her exit from EVANESCENCE during an appearance on THE HAUNTED guitarist Ola Englund's YouTube show "Coffee With Ola". At the time she said that she was "still in shock, kind of, because after being married six years, all of a sudden you're divorced."

Asked how she found out that her services were no longer needed in EVANESCENCE, Jen said: "Honestly, I was cleaning my apartment, and I got the phone call. And first of all, I was, like, 'Is this a bad joke?' And I remember, after I got the news, I hung up, and I have this hallway in between my studio and my living room, and I just lay there on the floor, staring at the ceiling, wondering what that was, and literally looking over to my suitcase that I had already started packing, because I was two weeks from going out on the road until pretty much the end of the year."

Asked by Ola if she was "okay" with the fact that her tenure with EVANESCENCE had come to an end, Jen said: "I'm hurt. I'm hurt and still in this blurry confusion of what just happened." But she added: "I'm getting there. Like I said, it would be wrong of me if I would play the 'hey, I'm totally okay' Jen. It's tough. And like I said, I'm still not great. But I'm getting there every day with tiny little things that make life beautiful."

EVANESCENCE has just kicked off a U.S. tour with KORN.