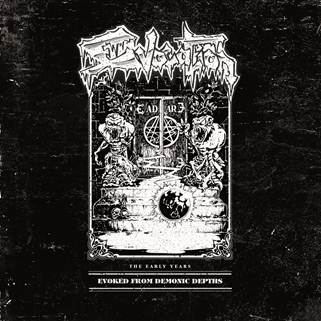 "It's with great sadness we have to announce the departure of bass player Martin 'Tore' Toresson from EVOCATION. Tore has been a part of the band ever since the reunion in 2005 and has grown into become a brother with us. We have shared many great memories in the years we have played together but now it has come to an end. Tore has declared to the band that due to a lack of motivation he has decided to step down from his position as bass player in EVOCATION. The band respects his decision but we also know he will be greatly missed by both the band and the EVOCATION fans that have had the chance to see Tore perform live and meet him at shows. From the bands side we want to wish him the best of luck in his future endeavours.

"As we are announcing the departure of Tore, we would also like to announce that we are now starting the search of a new bass player for EVOCATION. We are looking for an experienced bass player with live experience and that has a stage presence. If you think you could fit as the future bass player for EVOCATION, then please send your application together with some lines about who you are, videoclips, photos etc. to: [email protected]"

Commented Toresson: “Due to a lack of motivation I have decided to quit EVOCATION. It feels like a big release, even if it was a very hard decision to take. My time in EVOCATION has given me a lot of great memories, many new friends and four fantastic brothers. But it got to a point when it was no fun anymore. I wish my brothers in EVOCATION the best of luck in the future and I'm really looking forward to hearing the new album, which I know is going to be a killer!"

As previously reported, Century Media Records will release the complete demo recordings of EVOCATION. Entitled "Evoked From Demonic Depths - The Early Years", it will feature the following tracks:

Tracks 1 to 4 are taken from the "The Ancient Gate" demo, tracks 5 to 9 from the "Promo 1992" demo. Tracks 10 to 13 are previously unreleased rehearsal tracks and as a very special the band has recorded the unreleased track "Genesis", which has been written in 1992, but so far has never ever been available before (track 14). "Genesis" was recorded at IF Studios (IN FLAMES, THE HAUNTED) by producer Robert Laghi. All tracks have been mastered at Fascination Street Studio (OPETH, PARADISE LOST, ENSLAVED, GRAND MAGUS and many more). The remastering of the demo tracks was done using the original master tapes. The CD version also includes three live bootleg video enhancements as a bonus.

Besides the historical musical content, the release is packed with in-depth information on the history of EVOCATION. A foreword has been written by Anzo Sadoni (Metal Hammer),Björn-Thorsten Jaschinski (Rock Hard, Legacy) and Frank Schenk (Chaos magazine) took a deep dive into EVOCATION's history from their start in 1991 until the reunion in 2005 and on until the release of the band's highly praised third studio album "Apocalyptic". Guitarist Marko Palmén comments on every song and gives not just a glimpse but a detailed view into the writing process of the demos. All this information gets underlined by an elaborate usage of band photos, concert flyers and other visual content from the years 1991 to 1993 and the noble and balanced layout by Xaay (NILE, BEHEMOTH).

"Evoked From Demonic Depths - The Early Years" will be released as CD with 32-page booklet and an O-card as well as on deluxe 2LP (180g vinyls, gatefold sleeve, printed inner sleeves) and as digital download.

The album will be released on the following dates: